I remember the first JFrog customer training I delivered in February 2012. This slide was the one where I explained the importance of setting exclude patterns on your repositories (you can see it is 2012 by the slide design, right? Also, Ant was a thing.): 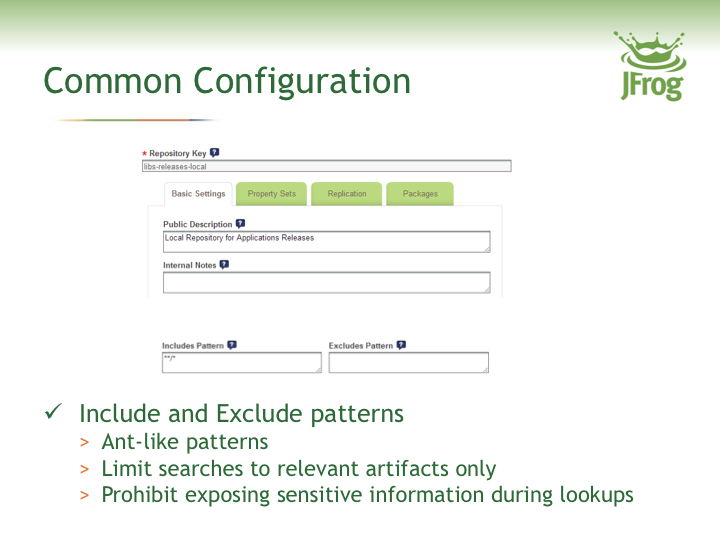 The story went like this: Your company, Acme, has JFrog Artifactory installed. It has the usual set of remote repositories (which proxy various central repositories like Maven Central), local repositories (which host your company’s internal artifacts), and a virtual repository (which aggregates locals and remotes under a single URL), simplifying the configuration of your build tool (in 2012, that would be Maven, duh).

Imagine, I said, you’re working on a very secret project called Secret Almo. The artifact coordinates are org.acme:secret-almo:1.0, and you don’t want your competitors to know about it. But what if one of your colleagues accidentally adds org.acme:secret-almo:1.1 as a dependency or any non-existing version of this library, and runs a build? This is what’s going to happen:

“Nix!” I shouted. “What a horrific neglect of privacy! What if someone watches the requests and discovers the Secret Almo!?!” Which was an appropriate way to motivate our users to use exclude patterns. Was it really that bad of a danger? I’m doubtful, but it helped.

We’ve been hammering this message into our customers and users since 2009: Ariel Seftel in 2015 – “Define an exclude pattern on remote repositories to prevent Artifactory from searching through them for packages that you know can not exist in them,” Shani Levy in 2015 again – this time specifically on security: “Manage security and get a performance boost with exclude patterns” and again, Rami Honing in 2016 – “modify… exclude patterns to enforce security policies.”

The oldest user guide still around is Artifactory 2, written by the co-founders Yoav Landman and Fred Simon in 2009, and guess what? It’s right there:

Obviously, the current documentation highlights it as well:

To avoid exposing sensitive business information as described above, we strongly recommend the following best practices:

Well, you get the point; we are big on Exclude Patterns. But why? Is it really because we are afraid that someone in Sonatype (maintainers of Maven Central) or GitHub (maintainers of npm Registry) will scrutinize the logs and find out about Secret Almo?! Well, yes, but not only that. Enter the perfect storm of…

The Caret, the Bazaar, and the Virtual Repository

Let’s get back to the (now probably virtual) offices of Acme, where the work on the Secret Almo is still underway. Let’s look at another component of the project, not secret at all, maybe a library, almo-common-utils. Its source might even publicly accessible, if, for instance, it is bundle as part of as Acme’s publicly accessible products or web applications, it’s written in Node and JFrog Artifactory now has a set of remote (proxying the official npm Registry), local (for sharing modules internally), and virtual npm repositories.

The only information an attacker needs to try to attack an unprotected organization is the existence of almo-common-utils, the major version of the library in use (let’s say they know version 3 is used widely in the organization), and the content of the source code.

They can clone and modify the source, embedding any malware inside, but still maintain compatibility with the original code, and upload it to npm Registry as secret-almo:3.99.99 because who is going to stop them?…

Now let’s look at Artifactory resolution at work without the exclude pattern when secret-almo:^3.0.0 is requested :

Remember I shouted “Nix!”? This is a double-nix. And an ouch.

But this is where an experienced Node.js developer would stand up and say…

Remember how I told you anyone can upload anything to the npm Registry? Well, not quite. If you create an organization in the npm Registry, you’ll be assigned a namespace to which only the members of your organization can upload (this is what npm calls public scoped packages). Does it save you from the Namespace Shadowing attack? Yes, when done right.

First, the company has to create the organization and reserve the namespace, because as everything in npm Registry, they are up for grabs. If your organization didn’t reserve it, a more sophisticated attack could still succeed – now the attacker has to hope some inexperienced developer will find a package with a familiar scope in npm Registry (“hey, look, there is an @acme/almo-common-utils here, it’s ours for sure”) and decide to use it. Also, even members of the official organization can still be neglectful and publish unscoped packages.

Solution? You know it by now…

Two simple rules to save your butt from the Namespace Shadowing  (a.k.a. “Dependency Confusion”) Attack

We’ll finish up with…

FAQ from Your Devil’s Advocate

Q: Are the Namespace Shadowing ((a.k.a. “Dependency Confusion”) attacks pose a security issue only if I use Artifactory?

A: Any repository manager which allows combining local and proxied repositories under a single URL can be attacked in a similar manner,  so no, this is not an Artifactory security issue. Those include Sonatype Nexus, and others. This isn’t because all of them are faulted in some way – they are working precisely as intended. And all of them have and strongly recommend the usage of best practices similar to exclude patterns (e.g. Routing Rules in Sonatype Nexus).

Q: Why don’t people use public scoped packages? Isn’t it the way to go?

A: It is for sure the way to go. But npm only introduced scoped packages in version 2 and it’s not as common in the industry as it should be (at least by now). But you? You rock, so you use them, right?

A: That’s a very good question. 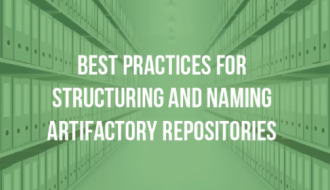 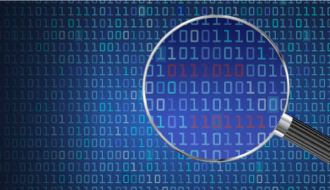 What the Federal Cybersecurity Order means for DevOps 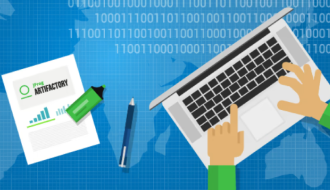