As we wrap up swampUP 2021, I have never felt more excited about being part of the global DevOps community. My greatest takeaway from swampUP 2021, with all of its great presentations and the participation of thousands of our community peers, is that DevOps today finds itself at a historical inflection point. Let me explain.

With software firmly at the heart of how we live and work, DevOps is no longer confined within the boundaries of IT. A year ago at swampUP 2020, we boldly predicted that every company would become a DevOps company. Well, it turns out our prediction wasn’t so bold after all because it quickly became true — and then some. We’re way past that point now. DevOps has become the epicenter of the world. And developers are at the center of DevOps, driving global innovation.

Courageously, developers turned into DevOps masters and haven’t shied away from the considerable challenges and responsibilities of this new reality. Through their work, developers are transforming all aspects of society, fueling the next wave of digital innovation in education, healthcare, business, entertainment, communications, social services, and much more. 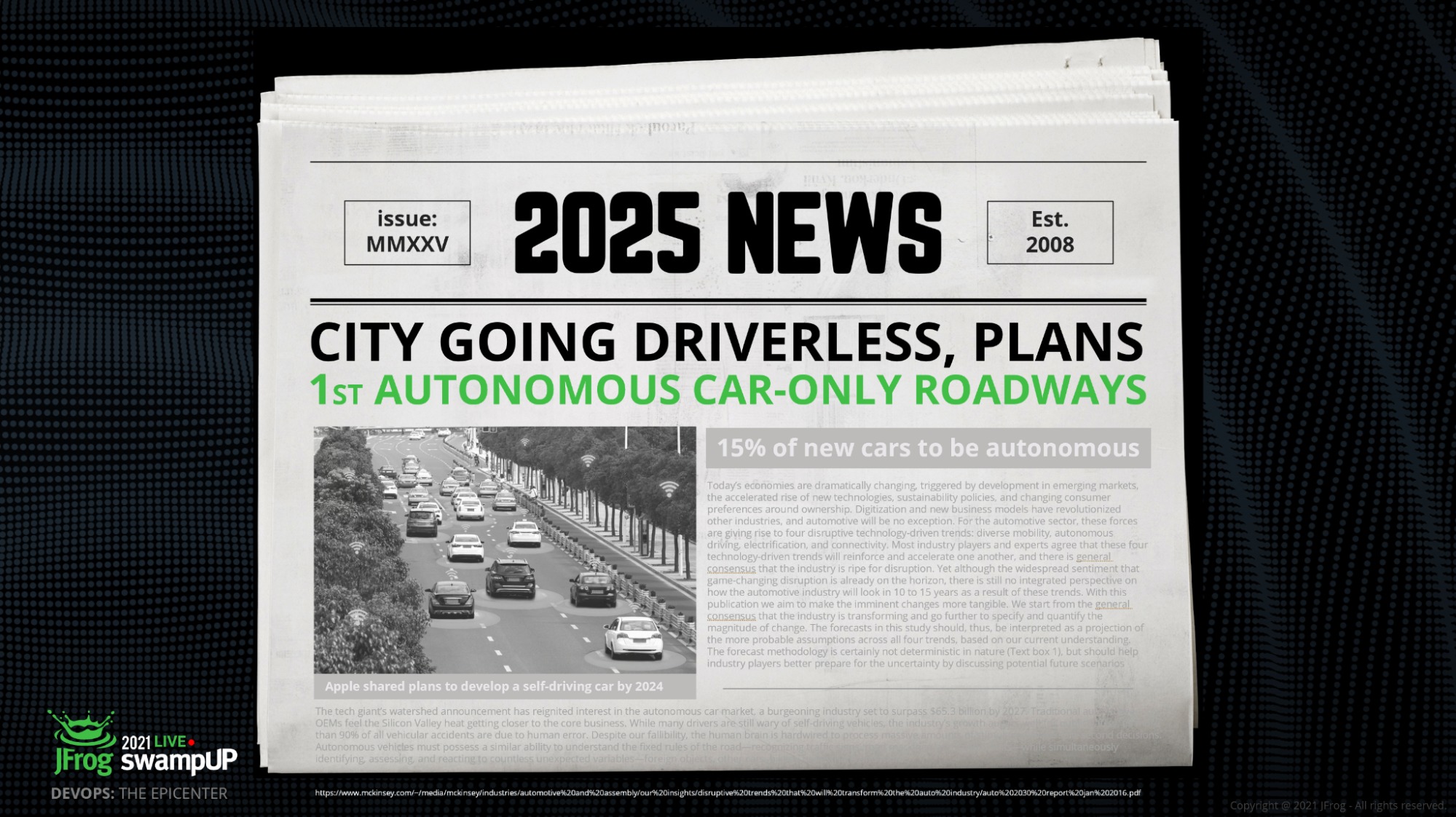 This new role for DevOps pros — as leading actors on the world’s stage — is here to stay. The applications and web services you build aren’t complementary accessories to our lives and our work anymore. They’re now intricately interwoven with our entire human experience.

We’re only scratching the surface of digital transformation and are now facing its second wave.

What Does This Mean for DevOps Teams?

Today, all digitally-transformed organizations recognize that software packages (A.K.A binaries, images or artifacts) are first-class citizens and primary assets in any DevOps pipeline. Why? Binaries are the single source of truth for what developers are building, testing, promoting and most important for what is ultimately released into production.

As soon as source code is compiled into binaries in the build phase, binaries become the most important element of the DevOps workflow, all the way to runtime. As a result, managing binaries is key for ensuring the integrity and reproducibility of a software build, and consequently the quality of an application.

That’s why we’ve built the JFrog DevOps Platform — with our Artifactory universal repository manager at its heart — to handle all aspects of managing the flow of binaries. This is what we call BinOps, or binary operations, which is the most crucial process for achieving fast and reliable software releases — the ultimate goal of all DevOps teams.

As the software world already practices today, the days of front end developers and back end developers are over. The same thing is now happening in the landscape of DevOps. Stakeholders must be full stack DevOps engineers with expertise spanning the end-to-end software development lifecycle — including security. In fact, security — as the SolarWinds breach has reminded all of us — must be at the core of DevOps, an essential part of building, deploying and releasing software.

It also means you must manage everything, not just source code — dependencies, metadata, binaries — and you need to operate at scale, supporting thousands and tens of thousands of developers. The work of today’s developers isn’t narrowly focused just on building their code anymore. It’s about collaboration, automation, security, distribution, data analysis, and agility – and it’s all powered by binaries. 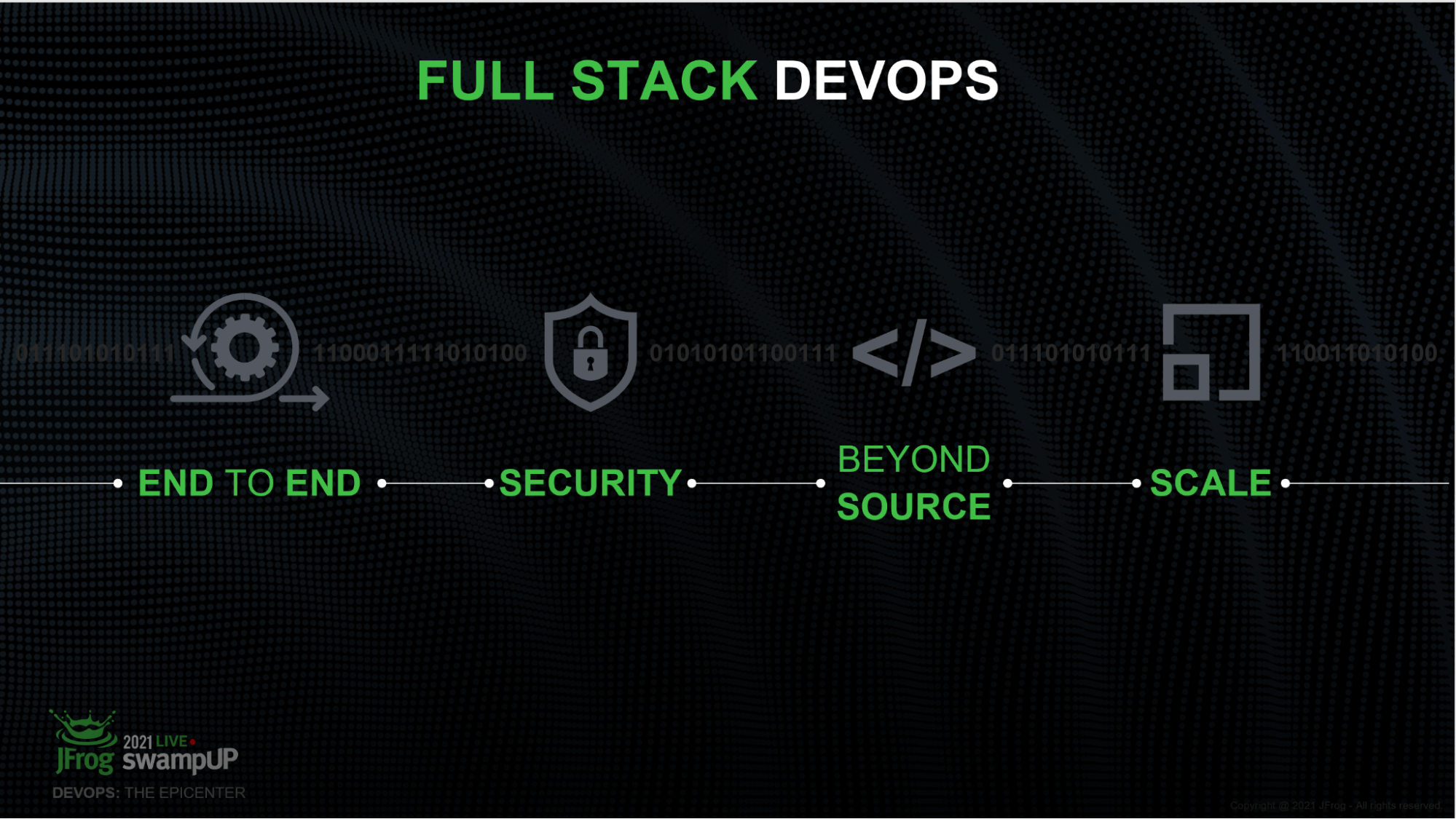 The View from the DevOps CEO Suite

I heard validation about this critical transformation of the developer’s role from my fellow CEOs at PagerDuty, Datadog, Elastic and HashiCorp, who graciously joined me during our panel discussion at swampUP 2021. As you know, Shay Bannon (Elastic), Jennifer Tejada (PagerDuty), David McJannet (HashiCorp) and Olivier Pomel (Datadog) lead companies that, like JFrog, are at the forefront of DevOps innovation.

I was extremely excited about how we all adopted the term “transformers” for today’s developers as they are the ones who shift the gears on how businesses operate in the digital world. We talked about DevOps trends, including the emerging importance of distributing code to the edge, the need to support hybrid (cloud-on prem) environments, the new balance between in-office and remote work, and the criticality of securing the ever-evolving SDLC.

We all shared similar insights regarding the heightened leadership role of developers not just within the IT sphere but in the world at large, and we agreed that the added responsibility puts a heavier burden on their shoulders.

Illustrating this issue, Jennifer shared findings from a recent PagerDuty survey that show developers are experiencing more stress, as they deal with a rise in daily IT incidents triggered by the shift to the cloud and to more distributed and complex architectures.

“We need to think about how we support the developer community in this leadership transition that they’re a big part of,” Jennifer concluded. I couldn’t agree more.

By Developers for Developers, Every Leap of the Way

At JFrog, we see it as our mission to grasp the importance of the work developers and DevOps engineers do, and we’re with this community every step of the way, as we’ve been since our founding in 2008. All the exciting announcements we made at swampUP 2021 are aimed squarely at providing our users with the tools and technologies they need to do the transformative work they’ve been tasked with.

For example, we announced the JFrog Private Distribution Network (PDN) for software updates, an industry-first which will help you accelerate large-scale application delivery. With the JFrog PDN, organizations will be able to speed up deployments and concurrent downloads across large-scale environments, spanning hybrid infrastructure, edges and IoT devices — solving the growing challenges of software distribution at scale.

In addition, we announced significant new enhancements across our JFrog DevOps Platform aimed at helping our users support binary lifecycle management at scale, which will improve developer productivity, efficiency and security across the software delivery process.

With these groundbreaking advances in our JFrog DevOps Platform, we’re taking another big leap towards achieving our “Liquid Software” vision, just as we did in the past with Artifactory and with Xray. We aim to power all software releases continuously and seamlessly across the globe, and create a world of always-updated, version-less software.

I’d like to offer my most heartfelt thanks to everyone who helped make swampUP 2021 a success — the DevOps community, speakers, partners and, of course, all the “Frogs” — our wonderful JFrog employees who worked so hard putting this conference together.

As we look forward, we see our industry excited about what’s to come. This is now a world where every company – as we mentioned in 2020 – has become a DevOps company, and where every developer will become a full-stack DevOps expert, owning their own destiny, and taking full accountability for their applications — all the way from design to deployment.

Watch the full recording of the CEO panel, a unique, candid discussion among the leaders of five major DevOps companies.