Kubernetes allows you to quickly and predictably deploy your applications, scale them on the fly, seamlessly roll out new features and efficiently utilize hardware resources. Simply a DevOps dream come true. JFrog fully supports deploying Artifactory to your Kubernetes cluster to serve as a universal repository manager for all your CI/CD needs wherever they are running in your organization.

Using Helm, the Kubernetes package manager, we have created a set of customizable Helm charts. These Helm charts can be configured according to your storage, databases, and other DevOps setting needs for the different Artifactory installations, including OSS, Pro and HA. Each parameter can be overwritten from the command line, or using a custom values.yaml file. Official JFrog Helm charts are available in the JFrog Charts GitHub repository.

The following step-by-step workflow initializes Helm and updates your Helm client with the latest index from the JFrog Helm charts repository.

Refer to these additional configuration options to further customize your deployment.

Artifactory Helm Chart can be configured with many options.

For example, deploy Artifactory OSS, by running the following command:

Artifactory as your Helm chart repository

Not only can you deploy Artifactory using Helm but Artifactory can also serve as your Helm Chart repository. It provides secure, private, local Helm repositories to share Helm charts across your organization with fine-grained access control. Proxy and cache public Helm resources with remote repositories, and aggregate local and remote resources under a single virtual Helm repository to access all your Helm charts from a single URL. 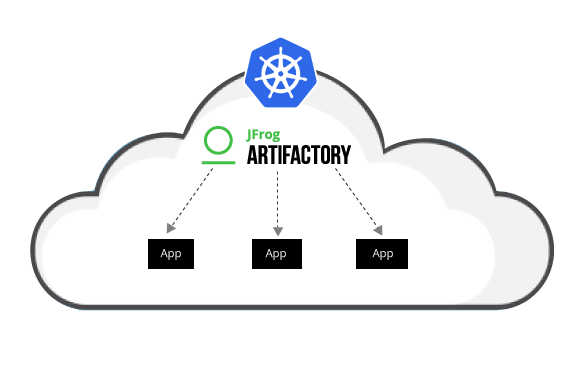 Embark on your DevOps voyage with Artifactory and Helm today.