Sunnyvale, Calif. & TOKYO, June 1, 2022 — JFrog, the Liquid Software company and creators of the JFrog DevOps Platform, announced the appointment of Vicky (Jia Yu) Chan as its new General Manager and Country leader for JFrog Japan K.K.  As GM and Country Manager, Vicky will guide JFrog Japan through its next phase of growth by building robust partnerships, increasing customer adoption, and growing revenues for the region. 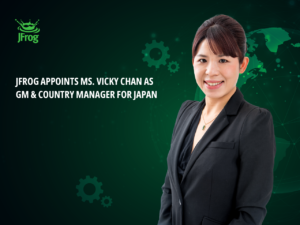 “Companies in Japan are increasingly looking to DevOps and security solutions to help rapidly deliver applications to fuel their digital transformation goals,” said Doron Ben Sira, Regional Vice President of APAC Sales for JFrog.  “I’m thrilled to welcome Vicky to the team as I know her breadth of experience in growing regional teams and devising revenue growth plans will be instrumental in helping JFrog grow in the region.”

With more than 20 years’ experience, Ms. Vicky Chan brings a wealth of expertise in structuring sales teams from the ground up, increasing customer engagements, and leading companies through successful market expansion and revenue growth. She joins JFrog from NashTech Limited, a global development consulting company, where she served as vice president and country manager for Japan. While there, she helped drive overall growth and increase revenues in manufacturing, financial, and distribution industries.

Before NashTech, Vicky held positions as Japan country manager at Talent Rover and senior manager of IT teams at Wahl & Case. She also gained a mix of IT licensing and operational management during her years with ArcSoft Japan, and HTC, the global consumer electronics company headquartered in Taiwan.

“I’m thrilled to join the JFrog team with a clear mission to help developers accelerate their updates with trust and peace of mind in knowing their software is secure,” said Ms. Vicky Chan. “I see DevOps, security, and JFrog at the epicenter of helping enterprises realize the future of software and I couldn’t be more excited to help Japanese companies realize this vision.”

JFrog Ltd. (NASDAQ: FROG), is on a mission to power all the world’s software updates, driven by a “Liquid Software” vision to allow the seamless, secure flow of binaries from developers to the edge. The JFrog Platform enables software creators to power their entire software supply chain throughout the full binary lifecycle, so they can build, secure, distribute, and connect any source with any production environment. JFrog’s hybrid, universal, multi-cloud DevOps platform is available as both self-managed and SaaS services across major cloud service providers. Millions of users and thousands of customers worldwide, including a majority of the Fortune 100, depend on JFrog solutions to securely manage their mission-critical software supply chain. Once you leap forward, you won’t go back. Learn more at jfrog.com and follow us on Twitter: @jfrog.