Red Hat OpenShift is an enterprise Kubernetes container platform. It lets you build Docker images and use them to deploy your applications on a cloud-like environment (even if it’s not really on the cloud, rather a simulated cloud environment). Images built in OpenShift can be easily pushed into JFrog Artifactory – JFrog’s leading universal repository manager.

With the latest JFrog CLI release, you can now collect build-info as part of your builds in OpenShift to make sure all your build metadata is recorded. Build-info is JFrog’s SBOM format, which includes modules, artifacts, dependencies and more information about the build. This information is useful for tracking vulnerabilities in the code.

Set up your environment

Before getting started, here’s what you’ll need:

To access your Artifactory Docker registry securely from OpenShift, you need to create a credentials secret by executing this command:

In your BuildConfig YAML in OpenShift, configure the Artifactory path and image tag by adding the following lines inside the “spec” block: 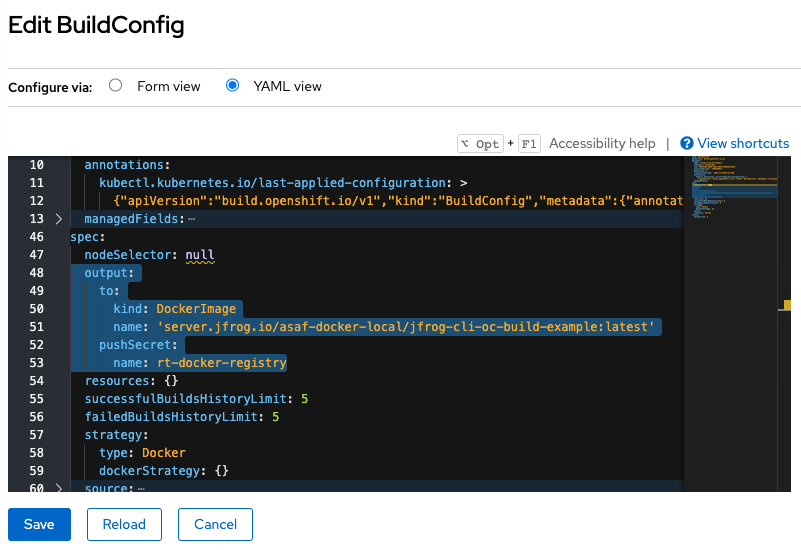 One last thing you need to configure is JFrog CLI with your JFrog Platform details. To do this, run the following command and follow the instructions:

Step 5: Let’s build an image and collect the build-info

After setting up all configurations, every time you want to build a new image of your application, just run this command:

Your image will then be available for you in Artifactory on the path you provided in the BuildConfig.

The build-info collected during this build is cached locally, and you can publish it to Artifactory by running this command:

Try it out for yourself! Practice using this feature with this example project we’ve created just for you.

You can generate build-info for your source code project, and even do so right from your code, with our build-info-go library and CLI.

You can also scan your Docker images and builds for security vulnerabilities and license compliance issues, and do many other operations on Artifactory with JFrog CLI.
Find out more in the JFrog CLI documentation.