In a recent supply chain security assessment, we analyzed multiple networking devices for security vulnerabilities and exposures. During the analysis we discovered and have responsibly disclosed four major vulnerabilities in Qualcomm’s QCMAP (Qualcomm Mobile Access Point) architecture that these devices were based on. An attacker that exploits the discovered vulnerabilities can gain remote root access to any of the affected devices.

The QCMAP architecture is in use on most modern Qualcomm-based modem SoCs, such as the MDM9xxx series. This leads us to estimate that these issues can potentially affect millions of devices of many different types in the wild.

In this blog post, we discuss the technical details of the vulnerabilities and how we discovered them, and offer guidance on how to detect and resolve them. Finally, we describe our disclosure process with the Qualcomm team who were aware of the issues and have provided patches that can be applied to fix the issues on vulnerable devices. The first and second vulnerabilities detailed below have been assigned the same CVE number (CVE-2020-3657) by Qualcomm and were listed in the Android Security Bulletin with critical impact (Android bug id A-153344684).

One of the software suites that run on many MDM-based devices is the QCMAP suite.

QCMAP is a software suite in charge of running many services in the mobile access point, which include the following key components:

QCMAP services are usually configured either via web:

Or, via a dedicated command-line interface, implemented by the QCMAP_CLI binary:

We have seen implementations of QCMAP in many device firmware images, including the following models that we have analyzed:

These issues highlight the importance of identifying and assessing the software supply chain for security. The issues were discovered as the JFrog security research team (formerly Vdoo) analyzed firmware images that are deployed in the field as part of an operational network. These devices were in turn developed by vendors who based their devices on the third-party Qualcomm-based modem. The operator of the network had zero visibility into the usage of that third-party component or to its potential vulnerabilities – known and unknown.

This discovery demonstrates the power and value of automated deep binary analysis in identifying new zero-day vulnerabilities in closed-source components. Using SCA Tools for automated security analysis capabilities delivered by Vdoo (now part of JFrog), the operator analyzed the firmware images received from the vendor. All of the device software components, including Qualcomm’s QCMAP binaries, were then scanned and analyzed for potential zero-day vulnerabilities. These potential vulnerabilities were verified by our own research team, and then disclosed to Qualcomm for mitigation.

This is the most severe issue we spotted, as it can easily lead to remote code execution (albeit authenticated). The issue resides in the QCMAP_ConnectionManager binary.

Note that use of HTTPS in the web server depends on the device vendor (we have seen both HTTPS and HTTP used in different devices). Without the use of HTTPS, web authentication can be easily bypassed by a local-network attacker.

Part of the basic functionality of the media server is to allow the user to set media directories to publish from. This can be done, for example, via the web interface: 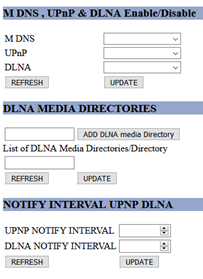 At the implementation level, the CGI handler at cgi-bin/qcmap_web_cgi passes data from the web form to the QCMAP_Web_CLIENT binary which parses the request. The sent data is expected to be in the format “var1=val1&var2=val2& var3=val3…”. The first variable is expected to be the “page” variable. If it is set to “SetMediaDir” the code parses the next variables to set the DLNA media directory. It then sends the variables to the QCMAP_ConnectionManager binary, which takes care of the request in the function qmi_qcmap_msgr_set_dlna_media_dir and passes it to QCMAP_MediaService::SetDLNAMediaDir. In this function, the code splits the sent directory by the ‘,’ character, and for each portion, it calls snprintf to create a command, which is then sent as an argument to the system function. There is no check on the user input to make sure that it doesn’t include malicious characters, thus it is possible to pass a string with shell metacharacters (such as  ‘;’) and run arbitrary commands.

QCMAP contains several CGI binaries that can be invoked by a corresponding page served by a web server. One of the pages of the web server is cgi-bin/qcmap_web_cgi. This page checks if the user has a valid session and then sends the information that was read to the CMAP_Web_CLIENT binary.

QCMAP_Web_CLIENT parses the data and performs the chosen operation. The sent data is expected to be in the format “var1=val1&var2=val2& var3=val3…”. The Tokenizer function is the function in charge of parsing this format. The function takes the variable names and values and copies them into output buffers sent to it by the main function. The code does not check how many variables were actually passed. Instead it runs until it finishes reading variables, and copies them into the buffer. The buffer is an array of strings (a two-dimensional character array) coming from the “main” function. Since the array has a limited amount of space for variables, after a certain amount of variables the data will overflow out of the buffer. Since the call to the Tokenizer function is done within an infinite loop in the “main” function, classic return address overwriting is usually not possible, however – depending on the exact architecture – there might be multiple ways to exploit the issue to obtain code execution.

Note that the string copying is done by calling the strncpy function with the length of the source buffer instead of the destination buffer, which is equivalent to a simple strcpy call and has no security benefits.

As is the case with many embedded devices, all of our tested devices did not have critical compiler security mitigations enabled (Stack canary support, Position independent executables, FORTIFY-SOURCE, etc.). This makes this vulnerability (and the next one, CVE-2020-25858) much easier to exploit for code execution, giving attackers full control over the devices and the ability to run arbitrary malicious code (rather than just crashing the vulnerable process).

This issue resides in the QCMAP_Web_CLIENT binary.

In the Tokenizer function mentioned before, the strstr function is invoked to search for a ‘=’ character, and its return value is used without checking. In several implementations we’ve seen that the call to strstr was replaced by a call to strchr. In both cases, if there is no ‘=’ character, the function will return NULL, causing a NULL pointer dereference. This crashes the process.

This issue resides in the QCMAP_CLI binary.

QCMAP contains a Command Line Interface (CLI) utility called QCMAP_CLI. From within this CLI the user can change different settings of the device.

One of the possible options is to set the gateway URL. When setting the URL, the set request is sent to the QCMAP_ConnectionManager binary to the function qmi_qcmap_msgr_set_gateway_url, which, at some point, calls the QCMAP_LAN::EnableGatewayUrl function. In this function, the code calls snprintf to create a string including the URL and then calls the system function to create a new process. There is no check on the user input to make sure that it doesn’t include malicious characters, thus it is possible to pass a string with shell metacharacters (such as  ‘;’) and run arbitrary commands.

This issue appears twice in some of the implementations of the function we saw.

For proof of concept perform the next steps –

To the best of our knowledge, these vulnerabilities have not yet been exploited in the wild and therefore have not led to any concrete security threat on deployed devices. However, as the proof of concept snippets above show, exploitation is trivial given the technical knowledge. We will continue to closely monitor any abuse of this vulnerability and will update this blog post accordingly.

Since the vulnerable files have no identifying version information to the best of our knowledge, the issue is not straightforward to detect. If you have access to a live device follow these steps to check if your device is vulnerable:

If your device has been found vulnerable and updating or patching the firmware is not an option, the following mitigation techniques may be applied: