We’re all familiar with Maslow’s Hierarchy of Needs. Our most basic human requirements like food and water are at the base, and the pyramid moves upwards into ever-maturing needs like community, social interaction, self-worth and creativity. The progression inherently makes sense to all of us, and we identify with it as human beings across cultures and geographies. 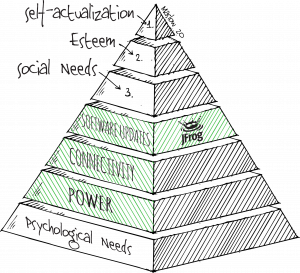 But, in the modern world, Maslow is proving wrong. Or at least, his pyramid is no longer complete or sufficient. I’ll tell you why: most of the world now runs digitally. Maslow of course couldn’t have predicted this revolution or taken it into account when he developed his hierarchy.

For example, we all panic when we see our devices’ power bars turn red. The electrical systems that run society are now the life-blood of everything we do. In essence, we don’t know how to live without electrical power. This crucial element is of course missing in Maslow’s original (presented to the world about 75 years ago), but it’s very real in our world today as we collectively witness the global Digital Transformation.

Just above the power layer in our so-called “Maslow 2.0,” we can legitimately place connectivity. There are billions of devices on the planet connected to the Internet. 5G technology will increase speeds and connectivity to 10-100x their current rates. The first question we – and our teenagers – ask is “what’s the WiFi password?” or other connection methods. The world is running on the network. Maslow, of course, didn’t have this in his pyramid, but we all recognize how real the connectivity need is.

But why do we need connectivity so badly? Just above the need to be online, we all recognize that we need to have connected applications that are secure, updated and delivered continually and worry-free. The apps on our phones are only one example that shows software is increasingly as pervasive as water, flowing across everything we do (there’s even a book about this). When you think about it, software actually informs everything about how we interact with one another in Maslow’s model. How do we connect with family? Friends? How do we feel about ourselves and our positions in society? How do we work and play? It’s all run on software, and that software is all based on continuous software updates and availability.

This is where DevOps comes in to power the new Maslow 2.0 pyramid. Can DevOps power your devices? Not really, though it may power the electrical grid. Can it create the network? Well, maybe the software to run the network, but it’s not really the same. But DevOps CAN and DOES and WILL dictate all of the software that runs across our hyper-connected world.

With that, I must conclude that by 2020, we will see that DevOps – and the consequences of DevOps – will fundamentally change how we look at the software that is “eating the world.” Frankly, I don’t think it’s hyperbole – just good, old-fashioned data-point gathering and some solid extrapolations. And of course, Maslow gave us a great model to fit our thoughts into.

Rather than pull predictions out of thin air to prove my point, I’m listening to what nearly 5,000 of JFrog’s customers are telling me. Some of our largest cloud and solutions partners also talk with us on a regular basis. Out of the conglomeration of those conversations, we can begin to see the future more clearly.

And what are these voices telling us? Thematically, there’s little doubt that our industry finds itself in the midst of a healthy chaos. There is a lot yet to be decided, and we’re just in the beginning of a sea change in how DevOps is viewed and implemented. But, we are already moving in the direction of the Maslow 2.0 model being fully realized.

At JFrog, we believe that by the end of 2020 we will have realized the following industry movements:

This isn’t about culture changes in the workplace and arguing about niche tools (though important). In our Maslow 2.0, we see that at the very heart of how we interact, feel, behave and create is software. That elevates the importance out of a tech concern and into a societal one. The ability to provide continuous, fearless updates to an edge device or gateway anywhere, anytime, will dictate the DevOps “winners.” Everyone in the world will be consuming ever-increasing bytes of software. It has to be secure, up to date and always transparent. Software Continuous updating will rule the world. 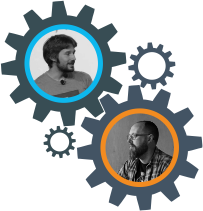 Why do I say this? You need only to look at the large companies, the trendsetters, the market leaders – in many cases told to us directly by them. In two quarters of 2018, we saw over $60 billion in transactions by large companies like Microsoft and IBM acquiring companies like RedHat and GitHub. Microsoft further is changing naming conventions to be around only products and around DevOps suites. Leaders of globally-influencing organizations like Google Cloud are stepping down, replacing CEOs that drove $6 billion in annual sales. These are not small, on-a-whim moves. They’re tectonic plates moving. Do we really think the “big boys” are jockeying for position, spending tens of billions to fight over a percentage of a $14 billion annual market? Hardly. Their acquisition and personnel moves show us they think this market is only scratching the surface. When you consider IoT and the ‘developer-to-device’ move, along with the 11-12-figure estimates for the TAM in that market alone, you begin to see one of the avenues for hypergrowth.

This may not seem bold, but it is a huge narrative and go-to-market change. Just three years ago, these same industry-moving companies like Amazon AWS and Microsoft Azure were telling us that everything would be in the public cloud and that on-prem was dead. Now, we see partnerships with VMware, Cisco and others to build cloud companies’ hybrid stories. Again, their moves are telling us the future. Hybrid cloud and multi-cloud offerings will win, vendors will offer developers the freedom of choice, and everything else will be niche or be seen as incomplete.

These are the requirements of DevOps, and they’re co-equal and symbiotic in 2020 to realize the Continuous Update vision. If companies deliver fast but are insecure, we will see data breaches, delivery problems and customer loss. If they’re secure but delivery takes more than even just a day, companies fall behind in the market. Organizations that offer speed/agility and secured solutions from the far left all the way through distribution will win.

There are as many as 35 million developers in the world today, and that will only grow through 2020. As has been said, developers are increasingly kingmakers. Those developers have been empowered to make a lot of choice over the years, and the Best of Breed approach is broadly accepted as an efficient result. The only issue is that the best tool for the best job can become quite cumbersome to manage, maintain and scale. Other companies have rejected that approach and adopted End-to-End platforms that claim to do it all. There are a few choices out there, but you often sacrifice feature maturity and a lot of freedom of choice to adopt them. So what is an organization to do? I believe platforms that allow choice, offering open REST API’s, that integrate best of breed solutions out of the box and universally support and work with the billions of software pipelines out there will win. It’s not an either/or. It’s “and.”

The world looked a lot different in 1943, when Maslow did a great job of identifying our needs, wants, desires and societal norms as human beings. The DevOps 2020 revolution is necessitating a Maslow 2.0, where the liquefied, Continuous Updating of always-connected software is a new core need. In fact, it could be argued that software is now the very baseline of our basic needs. Not because we eat or drink it, but because the food we eat and the water we drink can no longer be provided to us without it. We have disabled our own ability to grow food, drink water and provide shelter without always-on software.

So really, is DevOps the new enabler for all of modern human civilization?

It sounds lofty, sure. But what a ride it will be to find out!
I look forward to this amazing journey with our customers, partners and beyond as we continue, together, to reveal the role DevOps has in shaping our world.
To the future,
Shlomi