Virtually all development organizations need access to remote public resources such as Maven Central, NuGet Gallery, npmjs.org, Docker Hub etc., to download dependencies needed for a build. One of the big benefits of using Artifactory is its remote repositories which proxy these remote resources and cache artifacts that are downloaded. This way, once any developer or CI server that has requested an artifact for the first time, it is cached and directly available from the remote repository in Artifactory on the internal network. This is the usual way to work with remote resources through Artifactory.

There are, however, organizations such as financial institutions and military installations, that have stricter security requirements in which such a setup, exposing their operations to the internet, is forbidden.

Air gap to the rescue

To accommodate these use cases, we recommend a setup with at least two Artifactory instances; one on the DMZ and another on the internal network, a setup commonly known as an air gap.

We normally see one of two scenarios:

Here are two ways you could get dependencies from remote repositories:

This hashmap can be extended to support more and more requested artifacts.

Certain technologies might require different metadata, properties or API requests. For example, the following bash script caches a collection of tomcat and alpine versions based on the docker client:

Here are two ways you could export new dependencies (i.e. those downloaded since the last time you ran an export) and then import them to the internal folder.

A simple way to formulate complex queries in a filespec

But life isn’t always that simple. What if we don’t want to move ALL new files from our external instance to our internal one, but rather, only those with some kind of “stamp of approval”. This is where AQLs ability to formulate complex queries opens up a world of options. Using AQL, it’s very easy to create a query that, for example, only downloads files created after October 15, 2020 and are annotated with a property workflow.status=PASSED, from our generic-local-archived repository into out NewFolder library. And since JFrog CLI can accept parameters as a filespec, we create the following AQL query in a file called newandpassed.JSON:

…and now feed it to JFrog CLI:

Now we just upload the contents of NewFolder to the internal instance like we did before.

Some high-security institutions, while requiring a separation between the internet and their internal network, have slightly more relaxed policies and allow a one way connection. In this case, the internal Artifactory instance may be connected to the external one through a proxy or through a secure, unidirectional HTTP network connection. This kind of setup opens up additional ways for the internal instance to get dependencies:

Here’s the setup you can use:

The external instance on the DMZ includes:

Here’s how it works:

There’s a small setting you need to remember. The virtual repository on your internal instance must have the Artifactory Requests Can Retrieve Remote Artifacts checkbox set. 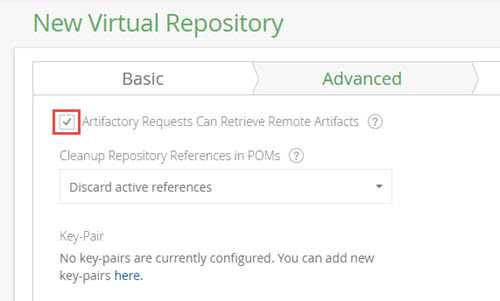 COMING SOON… Part 2 is available now! securing your your software binaries in an air gapped environment. Part 3 will be next… We’ll learn how to deliver immutable releases in an air gap setup.