DevOps adoption is happening by the largest organizations across the globe. At JFrog swampUP 2020, Gal Marder, VP of DevOps Acceleration and Shimi Bandiel, solution architect of the DevOps Acceleration team at JFrog, spoke about the new challenges encountered by many of these large organizations practicing DevOps when it comes to Continuous Delivery in their CI/CD process.

Large enterprises working with containers and Kubernetes can produce some large images being served to huge cluster runtime environments. Some of these clusters consist of hundreds of nodes and are very efficient in automating the deployment process. However, the challenge is handling download bursts of consumption of these compliant base images or layers, used by many of the containers that are essential to the application. In other words, delivering updates to these hundreds or thousands of nodes that need to download and update a new image simultaneously.

JFrog Artifactory CDN is great for global distribution, as it can cover a large hop of the journey toward the consuming points. JFrog Artifactory Edge nodes provide us with great control and an atomic reliable and efficient way of moving things closer to the runtime environment. They are control points at which validation and administration can occur. However, both of these options will incur high latency as the resources from the single distribution point are exhausted as the number of nodes increases.

The Peer to Peer approach is ideally suited towards handling bursts of distribution to a large number of local endpoints often in the same data center. The JFrog P2P implementation overcomes download bursts, enabling faster distribution with reduced latency. The peers stand between the Artifactory Edge and Docker clients, communicating between themselves to transfer pieces of the Docker image and layers in order to flatten the burst and make the network usage much better and faster. The peers are local processes that are running on the same client machines. 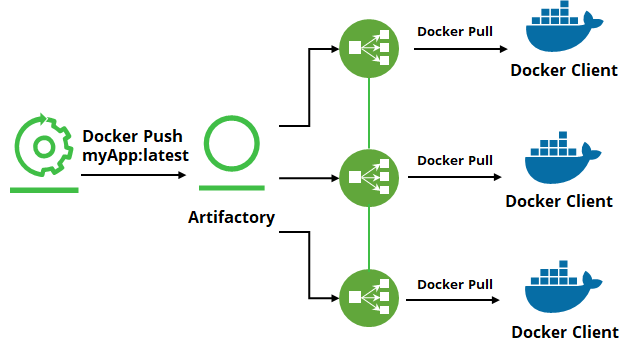 Using Peer-2-Peer to Overcome the Laws of Physics

Be sure to check out this session, including a demo to learn more about how JFrog has implemented P2P to deliver content efficiently and overcome download burst demand at scale.