Make no mistake: You can’t overlook software distribution in DevOps. At risk are the reliability, security and speed of your software releases – and your business itself.

This is especially true in enterprises that are releasing across numerous edge endpoints or IoT devices. As your releases’ cadence and payload grow, software distribution challenges multiply, particularly at the edge.

Topio Networks, an industry-research firm tracking the edge and IoT markets, has identified a new high-growth subsegment in the edge landscape: software distribution, which they see as a significant and interesting area you should be paying attention to.

There are half a dozen companies in this edge software distribution subsegment currently, including JFrog, with JFrog Distribution. “JFrog is one of the leading companies in this space,” said Gavin Whitechurch, Co-founder and COO of Topio during the recent joint webinar “Scaling Continuous Software Delivery for Edge & IoT Applications.”

What Is Software Distribution?

Software distribution is about moving binaries from where they’re created (usually, in the development or CI/CD stages) to the runtime environments for deployment, whether in data centers/cloud servers, edge infrastructure, or embedded devices, explained Michael Vakulenko, JFrog’s IoT Product Manager, during the webinar.

In small systems, software distribution is fairly straightforward. However, in larger systems it can quickly become a big challenge to achieve reliable, secure and timely distribution of software releases quickly.

The need for enterprises to have scalable, secure and reliable software distribution will only deepen. Why? For starters, enterprises want to accelerate releases, with many now deploying software to production multiple times per day.

Simultaneously, binary artifacts keep getting larger, especially as container use grows. Meanwhile, IT infrastructures are becoming more complex, with hybrid and multi-cloud environments, and the adoption of edge computing and IoT devices. 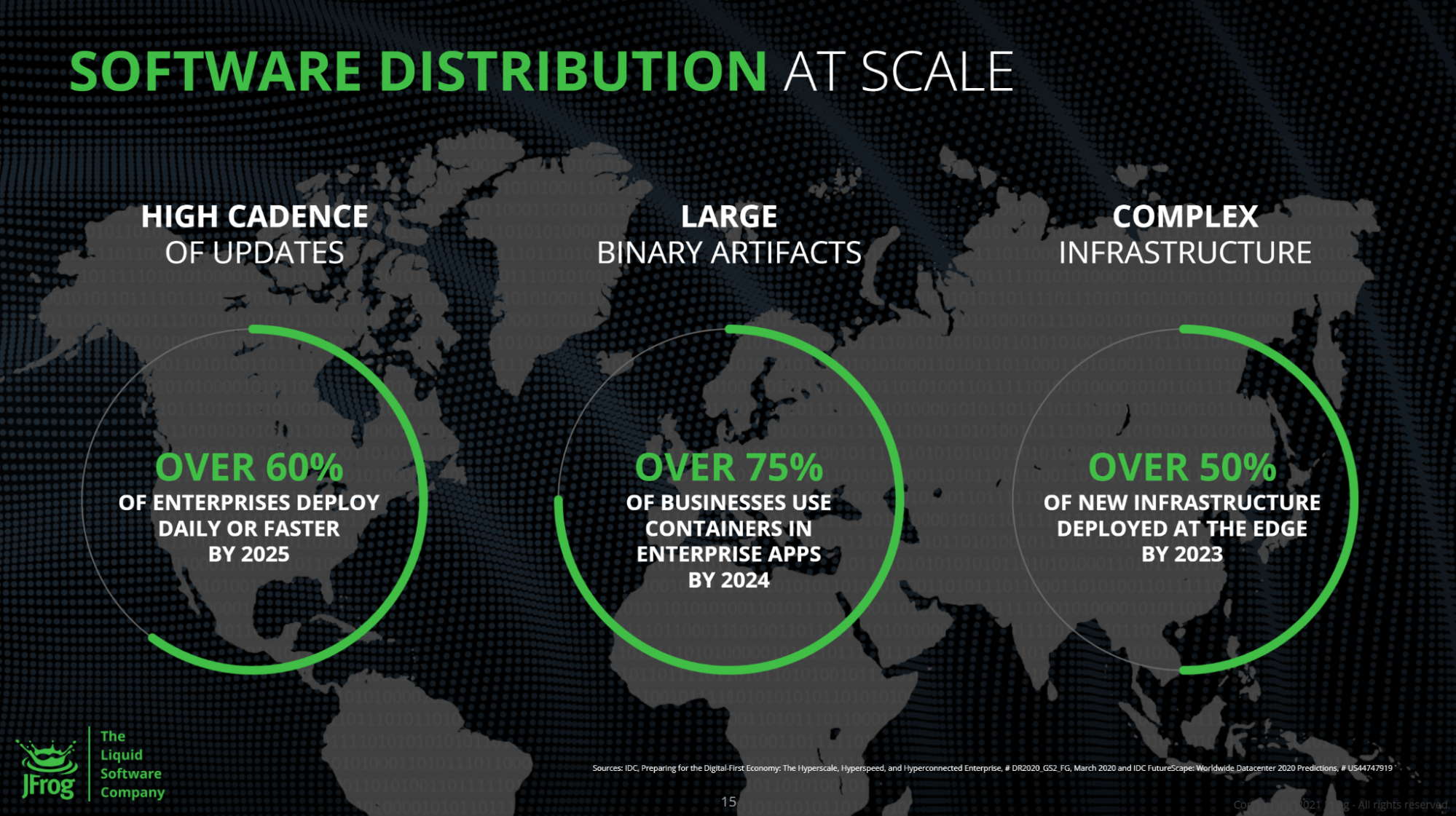 Content distribution networks (CDNs) are being pitched for software distribution, but they’re not built for this purpose, so they have notable weaknesses.

Let’s see how CDNs compare to a solution built from the ground up for software distribution, like JFrog’s:

There are particular challenges associated with distributing software to the edge, as opposed to, say, a traditional data center.

These are some key challenges, which apply to all edge computing segments, including service provider edges, on-premises and regional data centers, as well as smart and constrained devices:

Software Distribution in the JFrog Platform

Realizing how critical software distribution processes are to the modern DevOps stack, JFrog made Distribution an integral part of the JFrog end-to-end DevOps platform, enabling application delivery from any source, all the way to the edge.

The JFrog Platform covers all stages of the software binaries management lifecycle, from code to production — what we call BinOps. It includes a centralized artifact repository and container registry with JFrog Artifactory; security and compliance with JFrog Xray; CI/CD orchestration with JFrog Pipelines; and of course, JFrog Distribution.

Design Considerations for Software Distribution to the Edge

Let’s review the five key specific considerations required for an effective and secure solution to distribute software to the edge spectrum: from infrastructure edge such as store branches or POS, all the way to “thin” edges and IoT devices. We’ll also touch on how these design best practices are addressed in the JFrog solution.

First, a distributed architecture is key for coping with large scale edge deployments, and with their high peak loads. JFrog Distribution’s Private Distribution Network (PDN) is designed from the ground up for large-scale distribution of software artifacts across mixed, distributed environments.

As a distributed network, PDN propagates software artifacts, like packages or container images, from a central Artifactory through multi-tier topology of distribution nodes which are organized into groups. Edge clients download software binaries from the closest distribution group.

Furthermore, distribution nodes are managed remotely by the JFrog Platform, to which they report their status and metrics. The platform displays a live topology view of the network.

PDN combines two network acceleration and optimization technologies in one agent: CDN and P2P. Because distribution nodes share the load of many simultaneous downloads to ensure network resiliency and because PDN can be deployed on any commodity hardware, they essentially add a cache layer (CDN) to accelerate deployments and high concurrency downloads (P2P) to any type of infrastructure node or device. They don’t require high-performance servers with large network capacity.

Finally, PDN deployment and configuration is simple — just define the parent, group name and security token in the distribution-node configuration and it will automatically join the network.

Software releases usually contain multiple binaries which must be deployed simultaneously, so your distribution solution needs to maintain the interdependencies between these components, which can number in the thousands.

That’s where the concept of release integrity comes into play, so that incompatible components from different releases aren’t deployed.

JFrog ensures release integrity through release bundles — an atomic unit of software distribution that contains all of a release’s components with their metadata. Once the release bundle is created and signed – making it immutable and tamper-proof – JFrog propagates it to all PDN nodes or Distribution Edges that are part of your distribution infrastructure, or to your last mile of runtime environments.

JFrog’s PDN optimizes downloads and enables efficient distribution of large binary files across many nodes. This is how it does it:

In edge deployments, distribution nodes are often installed outside of data centers’ security perimeters, and connect to the backend over untrusted networks. That’s why it’s critical to implement a zero-trust security model which includes authentication, authorization and encryption of all the connections between the nodes and the network.

In addition, to download a binary file from the distribution node, an edge computing node must present a valid authorization token granting it permission. In short, our security model always includes encryption, authentication, and authorization of download plans.

PDN distribution nodes installed at edge sites will cache software binaries like Docker container images locally. The local cache can be warmed by downloading new software releases ahead of time.

Once the cache is warmed, local machines and devices can download binaries from the cache even without a connection to the cloud. Since binaries will be downloaded only once and used by all machines in the site, you’ll also significantly reduce bandwidth needs.

These are the five main design considerations for creating secure, efficient and reliable software distribution solutions for edge computing, and how they’re implemented in JFrog’s PDN, yielding such benefits as:

“We’re solving difficult issues for distributing software to large-scale systems, including edge systems, which frees customers to focus on their apps, instead of spending time putting together this solution themselves,” Vakulenko concluded in the joint webinar.

With PDN, JFrog covers distribution to edge sites – from thick to thin edges- spanning larger edge nodes, like a manufacturing plant, with powerful servers inside, all the way to embedded devices with JFrog Connect.

See It In Action!

To see a demo of PDN and learn more about these design considerations for scaling Edge and IoT application delivery, watch the recording of our joint webinar with Topio.

Learn more about JFrog Connect and create your free account to see how easy it is to update, connect and manage IoT devices.