The JFrog DevOps Platform is your mission-critical tool for your software development pipelines. The results of key binary management events in Artifactory, Xray, and Distribution can reveal whether or not your software pipelines are on-track to deliver production-quality releases.

The new JFrog Platform app for Microsoft Teams brings real-time visibility and awareness of what’s happening in your JFrog-powered software pipelines to your entire team through the Microsoft collaboration tool many software development teams rely on.

Whether it’s tracking security and license compliance issues, or monitoring builds and Docker image promotion, the JFrog Platform app for Microsoft Teams enables the transparency you need to speed up software development while keeping your applications safe. Developers, security managers, and production managers can better collaborate on delivering quality releases, responding in real-time to DevSecOps events as they occur.

get the jfrog app

Use Cases for Developers

For developers, the JFrog app delivers notifications through Teams that help you track and identify potential problems. You want to keep track of events you’re interested in such as a detected security vulnerability,  an uploaded Docker image, or promotion of a build.

What Kinds of Notifications Can I Enable?

The JFrog app for Microsoft Teams delivers notifications and actionable UI cards to one or more team channels for Artifactory repository actions you wish to make visible, such as artifact, artifact properties, Docker tag, or build events. Notifications can be paused, deleted, or invoke the JFrog Platform for more details from within the channel. 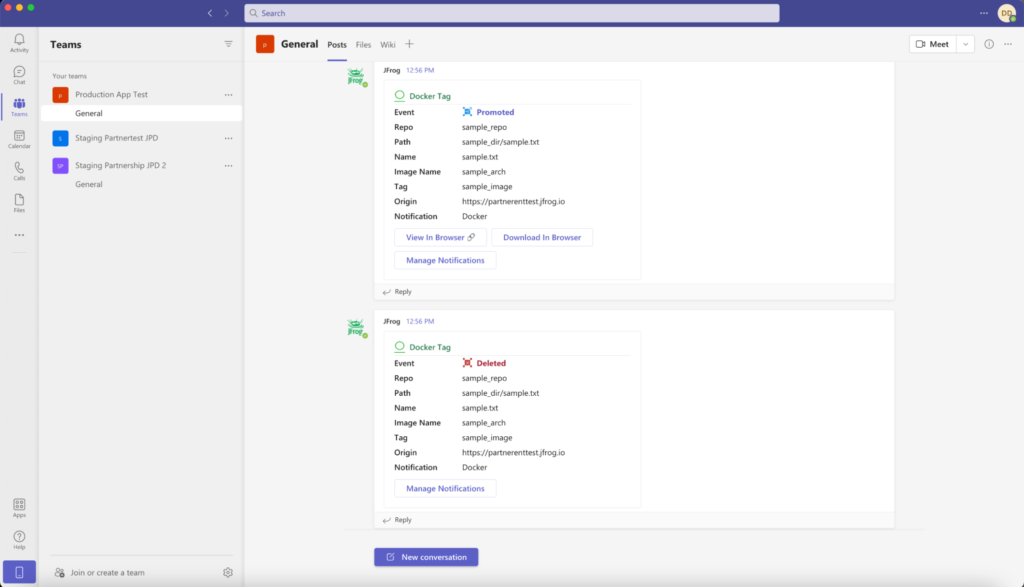 Security and Collaboration in Real-time

The JFrog app can send vulnerability and license compliance notifications to one or more team channels based on policies setup in JFrog Xray. The interactive notification enables recipients to take action, creating ignore rules, displaying details or invoking the JFrog Platform. 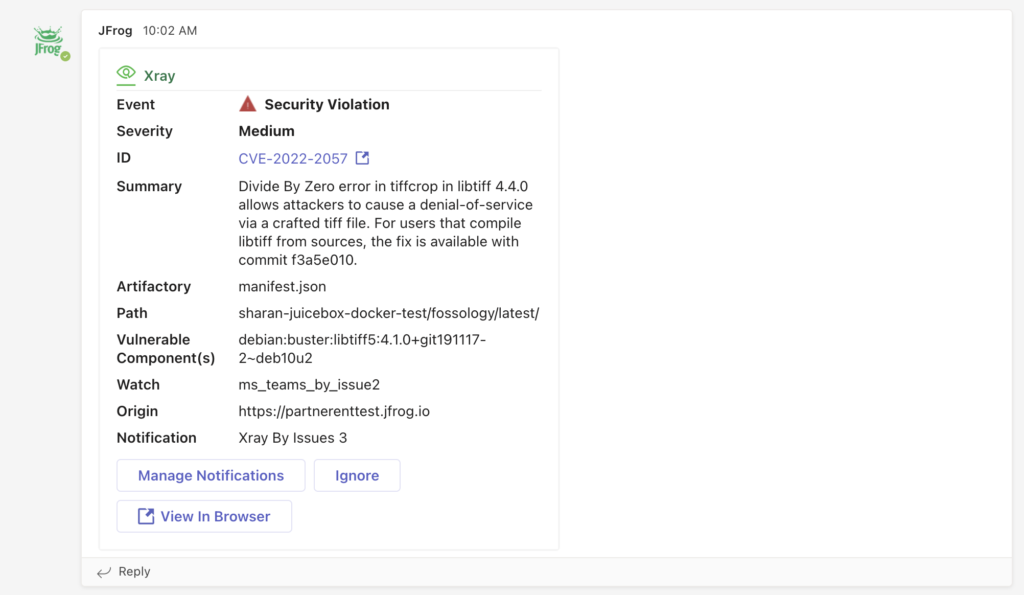 Imagine that you have an app running in production and a new zero-day vulnerability has been found in a popular software package that’s part of your app. Well, you need to inform a few different people – your development team that built the app, the SREs that are managing your instance of Artifactory, the DevSecOps teams that need to be alerted of the CVE information, and your Chief Information Security Office team who will liaison with your organization’s compliance, communication, and mitigation officers. All of these steps are much easier to do in the Teams collaboration tool rather than expecting all of these organization members to login to the JFrog Platform.

Lastly, there are few actions you can take within the cards themselves. For example, if you want to ignore specific violations or you want to check a new artifact for Xray information, those buttons exist within Teams. You can also download an Artifact directly from a notification card, open a link directly into the platform, or promote a build.

Notifications you can trigger in Microsoft Teams include:

For more information, you can also refer to the JFrog user documentation or visit our Microsoft Teams integration page.