Docker is definitely one of the biggest things to hit the software industry in the last few years. Everyone is using Docker, and Docker Hub is growing rapidly serving over 45,000 images by now. But did you ever ask yourself if Docker Hub is really the best platform to distribute your Docker images. It stands to reason, but reason be damned; We think Bintray has an edge over Docker Hub and here are the reasons why.

Yes, Docker Hub recognizes organizations and teams. You can have all the relevant people open an account on Docker Hub and then organize them in whatever way serves your needs to expose or hide registries as you see fit.

How does Docker Hub handle that? Well, you can ask for your customer’s account, and then include him in the right organization or team. But then, you need to be really careful with what you put in the repository you have exposed to him. Or you need to add him to a team, and later remove him. Manageable so far… But now he also wants his boss to see it, and later the CTO, and two weeks later, you find that your guy has just changed jobs and is working for your competitor. Did you remember to remove him from that team or can he still access your private repository?

Bintray removes this pain-point with entitlements and download keys

Bintray lets you create entitlements which define, in minute detail, exactly what part of a repository can be accessed – from a whole repository down to the level of a single path within a repository. You can define who has access by name, geographic region, IP domain and pretty much anything else. You can also limit that access to a very specific period of time. Once you have defined your entitlements, you can then create keys which unlock the access the entitlements provide. Your user needs to provide the key and its associated password each time he accesses a resource which he is entitled to. You can even define what kind of access each entitlement provides. It can be for download only, or for download, upload and delete.

Ever wondered how many times your image has been downloaded? Of course you have; it’s a measure of success. But going beyond self-flattery, it’s not enough to know that magic number of downloads. Wouldn’t it be helpful to be able to know who downloaded your images and from where? Bintray gives you that. The stats pages on Bintray give you total numbers, but download logs let you segment the downloads by region, country, IP address, and even down to the specific user and organization. For your public repositories this can be really useful, but for your private repositories it’s critical for you to know who is accessing your packages and what they are doing in your repositories. You can read more about stats and logs in this post the Bintray Blog.

3. There is more to the world than Docker 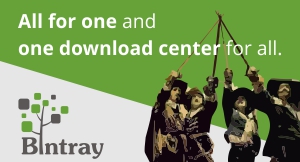 Docker may be the best container to have ever hit the software docks, but at the end of the day, you are only using Docker to create a virtual world in which to run your products. And your products are built with packages that are Java, Ruby, NuGet, Python, Debian … and new formats hit the news all the time. How are you going to distribute those? Not on Docker Hub. So should you use Docker Hub for Docker and something else for all the rest? Well, if you can use that something else, aka Bintray, for Docker images too, then why not simplify your life (and scripts) and distribute all packages through Bintray.

All for one and one download center for all.

3.5. For Bintray, distribution is a core competency

Docker is making huge waves in container technology. This is their core competency; not software distribution. You can use Docker Hub to distribute your images, but you must ask yourself, “Will Docker Hub receive the same level of attention from its makers as container technology does?” Bintray’s scalable infrastructure is deployed on clustered servers in multiple data centers around the world, and currently serves over 200 million downloads per month of 200 thousand packages that reside in 50 thousand repositories.

That’s what we call a core competency!

Like Docker Hub, Bintray offers a host of great features like fast CDN downloads, a rich REST API for automation, searchable metadata and more. But like Docker is redefining container technology, Bintray is redefining software distribution. The service tiers offered by Bintray make it the best choice for distribution of both free OSS images as well as for commercial organizations that need enterprise grade software distribution features. Bintray lives and breathes software distribution; that’s what it does, and that’s where it will continue to evolve to stay the best solution for a download center, for Docker images and indeed for all other software package formats.