Every company is now a software company, and thus every company must become a DevOps company. While JFrog has helped thousands of companies enable DevOps, they have had to conquer one of the biggest challenges on their own: automate their entire sprawl of DevOps tools and processes.

Until now. At our last swampUP user conference, we announced JFrog Pipelines.

But what is it? JFrog Pipelines is a DevOps automation solution that connects all key processes in the software delivery lifecycle (SDLC), from development through testing to production. Using little code, it allows you to create smart, event-driven workflows across tools and teams with ease, speeding up the release of software applications. JFrog Pipelines is a critical tool to achieve continuous integration, continuous delivery, continuous deployment, and continuous monitoring in DevOps.

With this addition, the JFrog Platform now offers a complete, natively integrated, end-to-end solution for driving, tracing, and securing an enterprise’s SDLC, empowering organizations to leverage their existing infrastructure investments.

This uniqueness in the DevOps landscape makes JFrog Pipelines a prime contender for any enterprise’s automation needs, with four reasons topping the list:

Pipelines provides a central console for managing all workflows for automated continuous integration, continuous delivery, continuous deployment, and continuous monitoring, thus enabling an organization to get a holistic real-time view of its entire DevOps ecosystem. It reveals task flow and interdependencies, along with the success record of all runs performed.

Pipelines natively integrates with the popular DevOps tools your organization is most likely to use, for source control, storage, issue-tracking, notification, orchestration, and more.

Pipelines is natively integrated with Artifactory and the JFrog platform, with built-in directives for pushing artifacts, performing builds, pushing build information, image scanning, and build promotion, for fast results with minimal code. In addition, Pipelines is an integral part of JFrog Enterprise+, providing a complete end-to-end solution that also integrates with most popular DevOps tools. 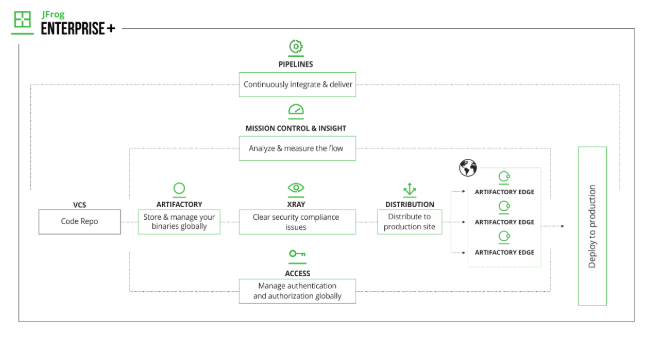 At swampUP 2019, these and other advantages were showcased by JFrog engineers Avi Cavale and Dror Bereznitsky, as seen in this short video: