UPDATE: As of May 1, 2021 Bintray services will no longer be available (ConanCenter and JCenter are not affected) for more information read the Centers Deprecation Blog

OpenWrt is typically associated with network routers and similar equipment, and indeed the official OpenWrt website lists overs 1200 devices on which it runs. Network routers may sound boring (well, to some of us), but as the Internet of Things (IoT) continues its crusade around the world, many people don’t know that OpenWrt is also used on other devices such as phones, robots, sensor networks and more. To accommodate these more glamorous devices, and implement their cool features and functionality, and to give a network router an edge beyond the basic functions, you need a bit more than the Linux kernel on which OpenWrt is based. This good stuff comes in the form of over 3,500 Opkg packages which are available for download from public repositories. The good news is that JFrog Artifactory and JFrog Bintray together offer developers an end-to-end solution to manage their Opkg packages from development through to distributing them automatically to all those routers and robots alike.

While you can use Bintray to distribute your Opkg packages independently of Artifactory, using Artifactory for your OpenWrt development, can speed up your development cycles. For example, Artifactory support for Opkg gives you local repositories for the components you are developing, remote repositories to proxy remote ipk packages and get all those dependencies you need, and it even handles GPG signatures to verify packages. Once your packages are ready to go, use Artifactory’s Distribution Repository and push them to Bintray.

Bintray support for Opkg lets you work transparently with the Opkg client to resolve packages from Bintray and to upload them for distribution. As a mature and universal cloud platform for the distribution of software, Bintray can deliver software updates to users and devices alike over fast CDN, with advanced security features like access entitlements, detailed download stats and logs and more.

Once your file is uploaded, Bintray will calculate the repository-wide Opkg metadata to maintain compatibility with the Opkg client.

If the version specified in the command don’t exist, Bintray will create it for you. And of course, you can do all of this through Bintray’s REST API, or through the JFrog CLI and in that case, you can do the above and publish the file in a single call.

Downloading is also a snap

The Opkg client works transparently with Bintray. You just need to define Bintray as a feed in your opkg.config file:

And if you need authenticated access to the repository, you can just add your Bintray credentials to the config file:

You don’t even need to memorize these lines. Bintray has a cool Set Me Up feature for every repository type that displays these code snippets for you to copy and paste into your scripts. 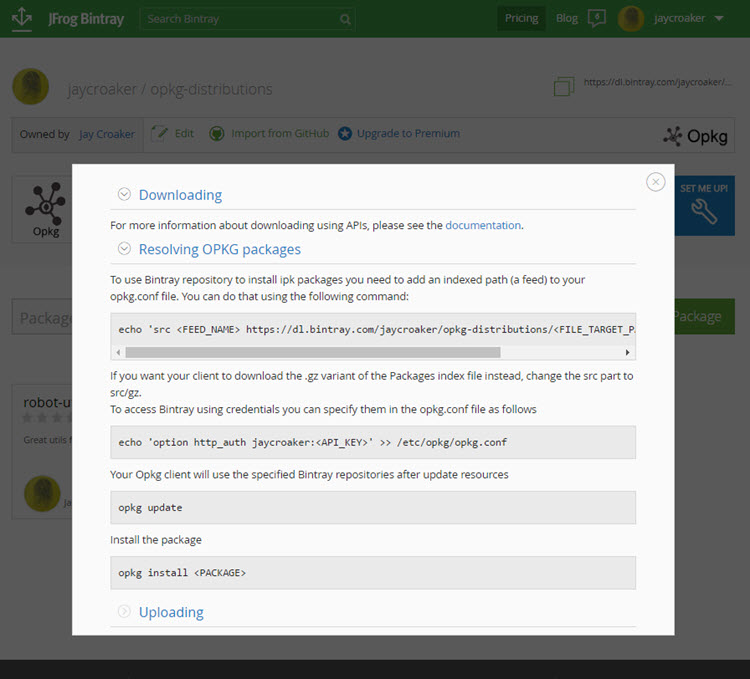 So if routers, robots, and OpenWrt are what make your day, have a look at Bintray’s support for Opkg. Need private repositories? Check out Bintray Premium where you can use signed URLs and access entitlements for fine-grained control over who (or what) can download your ipk files. We envision the day when, not only routers and robots, but all devices get their software updates from Bintray.