Docker is by far the world’s best known and most widely used container platform. But there are other technologies on the container landscape, each with its own approaches and use cases. So, if you’re new to containers, you’ll want to consider these alternatives before jumping in and potentially making an IT decision you might later regret. Read on and we’ll give you an overview of six, non-Docker options. These include not only complete solutions, but granular tools that you can use as either a complement to Docker or part of a completely different container system.

Let’s have a look at seven complete packages, which are currently Docker’s most direct competitors.

It allows you to set up unlimited Docker registries, using local, remote, and virtual Docker repositories. Working transparently with the Docker client, it manages Docker images, which have been created internally and downloaded from remote Docker resources, such as Docker Hub.

Artifactory supports promoting Docker images from one Docker repository in Artifactory to another. Artifactory also supports the relevant calls of the Docker Registry API so that it can transparently use the Docker client to access images through Artifactory. 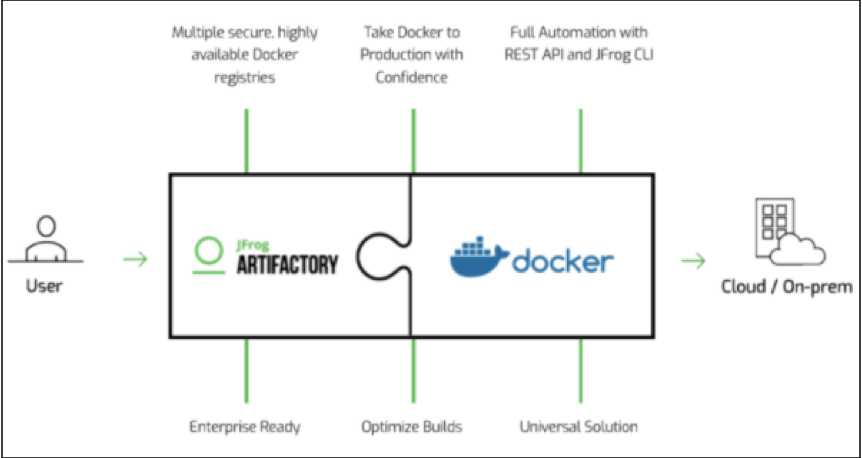 Set Up your own Docker Container Registry

LXC is a set of low-level container management tools that are part of the LinuxContainers.org open-source project. The technology was a forerunner to Docker and is sponsored by Canonical, the firm behind Ubuntu.

The goal of LXC is to provide an isolated application environment that closely resembles that of a full-blown virtual machine (VM), but without the overhead of running its own kernel. LXC also follows the Unix process model, where there is no central daemon. Put simply, instead of being managed by a single, central program, each container behaves as if it’s managed by a separate program in its own right.

LXC also works differently from Docker in a number of other ways. For example, you can run more than one process in an LXC container, whereas Docker is designed for running a single process in each container. Nevertheless, Docker is better at abstracting resources and, as a result, its containers tend to be more portable than LXC counterparts.

Hyper-V containers are more aligned with the VM virtualization model, as each can carry its own kernel. This means they offer greater portability than traditional containers, as applications running within them don’t need to be compatible with the host system. They also afford better security as a result of increased isolation from the host operating system and other container environments. However, these benefits come with a trade-off, as Hyper-V containers carry a slightly higher infrastructure footprint than Windows and other containers that rely on a shared kernel-based system.

You can manage Hyper-V containers using either Docker or the Windows PowerShell, but each guest environment must be Windows based, although not necessarily the same version as the host operating system.

Between its robust ecosystem and strong level of adoption, rkt (formerly known as CoreOS Rocket) has arguably become one of the most viable alternatives to Docker.

The core strengths of this open-source technology are security and, above all, interoperability with other systems and frameworks. For example, it can run Docker containers and uses a pod-based architecture, which works straight out of the box with Kubernetes.

As with LXC, rkt doesn’t use a daemon and, thereby, provides more fine-grained control over your containers at the individual container level.

Despite its advantages, ever since RedHat acquired CoreOS in 2018, the future direction of rkt has been increasingly uncertain. Furthermore, in August 2019, the Cloud Native Computing Foundation (CNCF) decided to drop its support for the project.

The following are also Docker alternatives, but they’re not complete, end-to-end solutions. Instead, they’re used either in harmony with other technologies or in place of specific components of the Docker system.

Podman is an open-source container engine, which performs much the same role as the Docker engine. It distinguishes itself because its isolation and user privilege features make Podman inherently more secure.

Equally, its command-line interface (CLI) commands are practically identical to those supported by the Docker CLI, with the exception that you’d use Podman in place of the Docker base.

Although Docker and Podman CLI commands are similar, knowing how to tell the difference between the two will help you when working with them behind the scenes. Docker follows the client/server model, using a daemon to manage all containers under its control. However, Podman, like rkt and LXC, functions without a central daemon. This can potentially improve the resilience of any given container by eliminating the possibility of a single point of failure (SPOF). In other words, if your daemon goes down, you’ll lose control over your containers. By contrast, in Podman, containers are self-sufficient, fully isolated environments, which can managed independent of one another.

Further, where Docker gives root permission to the container user by default, non-root access is standard in Podman.

runC is a lightweight, universal OS container runtime. It was originally a low-level Docker component, which worked under-the-hood, embedded within the platform architecture. However, it has since been rolled out as a standalone modular tool.

The idea behind the release was to improve container portability by providing a standardized, interoperable container runtime that can work both as part of Docker and independently from Docker. As a result, runC can help you avoid being strongly tied to specific technologies, hardware, or cloud service providers.

Supported by both Linux and Windows, containerd is basically a daemon, which acts as an interface between your container engine and container runtimes.

It provides an abstracted layer that makes it easier to manage container lifecycles – such as image transfers, container executions, snapshot functionality, and certain storage operations – through the use of simple API requests. This avoids the hassle of making multiple, low-level system calls. As those system calls can vary from platform to platform, this also makes containers more portable while allowing the API to remain fundamentally the same.

Like runC, containerd is another core building block of the Docker system, which has been spun off as an independent, open-source project. 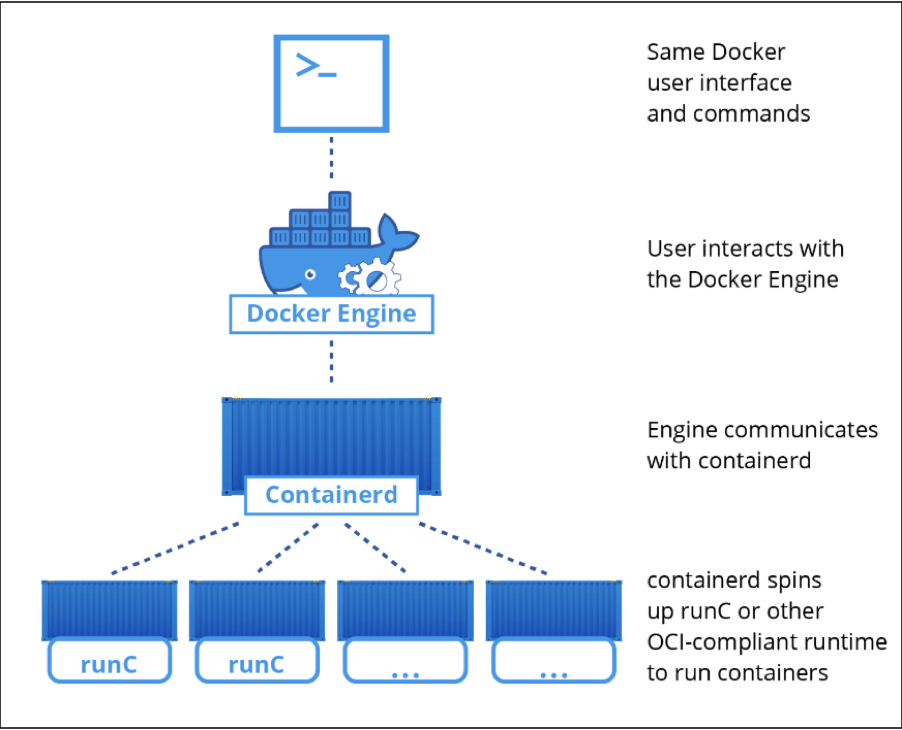