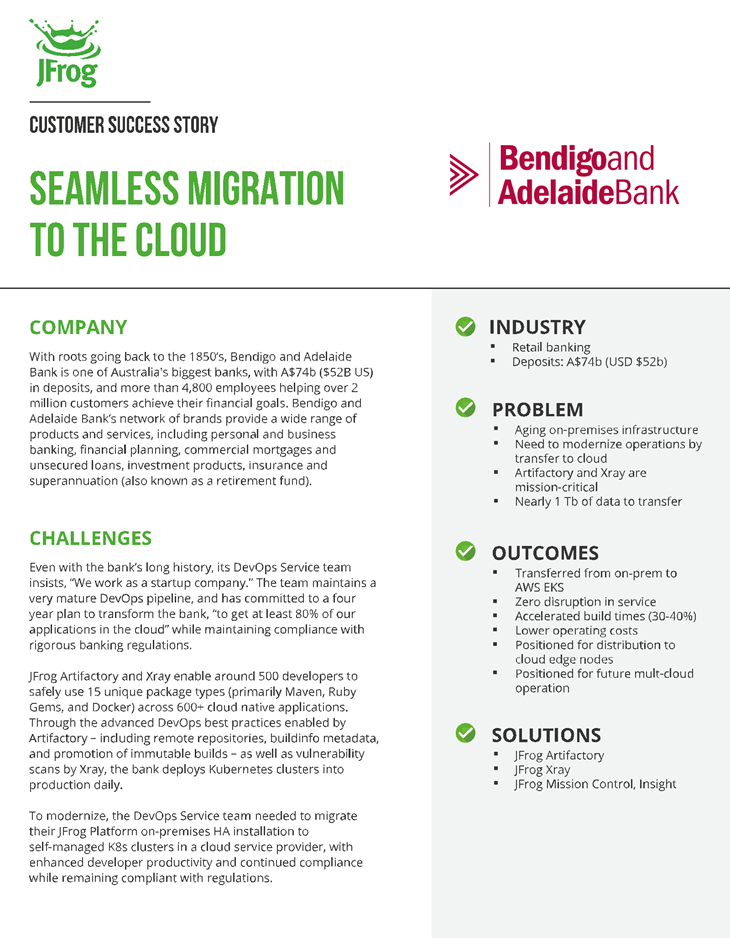 With roots going back to the 1850’s, Bendigo and Adelaide Bank is one of Australia’s biggest banks, with A$74b ($52B US) in deposits, and more than 4,800 employees helping over 2 million customers achieve their financial goals. Bendigo and Adelaide Bank’s network of brands provide a wide range of products and services, including personal and business banking, financial planning, commercial mortgages and unsecured loans, investment products, insurance and superannuation (also known as a retirement fund).

Even with the bank’s long history, its DevOps Service team insists, “We work as a startup company.” The team maintains a very mature DevOps pipeline, and has committed to a four year plan to transform the bank, “to get at least 80% of our applications in the cloud” while maintaining compliance with rigorous banking regulations.

To modernize, the DevOps Service team needed to execute a cloud migration of their JFrog Platform on-premises HA installation to self-managed K8s clusters in a cloud service provider, with enhanced developer productivity and continued compliance while remaining compliant with regulations.

The DevOps Services team chose Amazon Web Services (AWS) EKS to host the Artifactory repository and Xray security. Using the Helm charts from JFrog made it “really easy to set up an instance of Artifactory and Xray in a Kubernetes environment with one command and a few values.” Within a single hour, they can spin up a test or production cloud environment for the JFrog Platform.

Federating repositories between the on-prem and AWS installations, the bank was able to duplicate 1TB of accumulated packages, artifacts, and binaries data to the new cloud environment in AWS. This bidirectional mirroring capability in Artifactory, along with user token synchronization through JFrog Access Federation, enabled developer teams to seamlessly transition their repository use to the AWS environment with zero disruptions to daily operation.

Cloud migration of all data and teams to the new AWS environment – including initial tests as well as rigorous internal compliance and governance procedures – was completed within six months.

Now fully in the cloud, production has accelerated, improving build times 30-40 percent and greatly reducing costs. The successful cloud migration has encouraged the DevOps Services team to plan a multi-cloud strategy, mirroring their JFrog Platform on AWS to a Google Cloud environment for greater resilience.

“Thanks to the replication of repositories, we didn’t have any data issues at all between the two instances. They were like for like, even though they were on completely different infrastructure.”

“Some people didn’t even realize that it’s now running on AWS, and not running on-prem anymore.”