With more than 6 billion rentals to date, Redbox is America’s leading source for affordable, new release movie rentals. Redbox offers DVDs and Blu-Ray Disc rentals through the nation’s largest network of more than 41,000 kiosks. In addition to physical rentals, Redbox has a streaming platform, Redbox On Demand, which enables customers to stream the latest movies and TV shows on-demand on all major devices – all without a subscription. Most recently, Redbox launched Free Live TV, allowing users to watch a growing lineup of channels and entertainment for free!

Redbox development teams build with a variety of programming languages and package formats including Docker, Debian, PyPi, ReactJS (npm), .Net (NuGet) and a myriad generic package types. They therefore require a single source of truth for their package management across their many pipelines, with full visibility into both CI/CD processes and security standards. As an agile and eﬃcient company building a cloud-native DevOps infrastructure, they require a universal solution to manage all of their package types and a scaleable cloud infrastructure to support them. Redbox was looking for an environment that supports their rapid development cycles, and has chosen to use JFrog Platform solutions on Amazon Web Services to allow them to be more agile and reliable.

Joel Vasallo, Head of Cloud DevOps at Redbox, has been implementing DevOps for many years, and is very familiar with the beneﬁts of DevOps tools such as JFrog Artifactory from his experience at previous companies. After joining Redbox in 2018, Joel and his team became key members of Redbox’s digital transformation to the cloud by modernizing and building a cloud native platform within Redbox. Using previous experiences with JFrog products at other companies, it made sense to bring JFrog Artifactory into the Redbox DevOps engineering team. JFrog Artifactory sits in the middle of Redbox’s cloud CI/CD tool chain and provides a centralized way to manage all the binaries created across their multitude of programming languages. JFrog Xray provides a critical security layer, allowing Redbox’s teams to have a broadly-adopted and reliable solution for binary security. Hosting their toolchain on AWS just made sense to help alleviate the headache of hosting, managing, and uptime maintenance of their infrastructure, and utilizing the AWS Marketplace to adopt DevOps solutions like JFrog has streamlined corporate patterns, and provided easy multi-region and global readiness. Redbox relies on JFrog and AWS to manage Debian, npm, Docker, generic package types and more.

Redbox’s cloud journey has been successful thus far due to improved continuous delivery to its cloud infrastructure. Leveraging the power and rapid on-demand scale of AWS, Redbox is quickly able to scale workloads and deploy changes fast to ensure a great customer experience. After adoption of Artifactory and Xray on AWS, Redbox has seen a 5-10x increase in monthly deployments, allowing them to stay ahead of the competition in a rapidly-changing entertainment vertical. 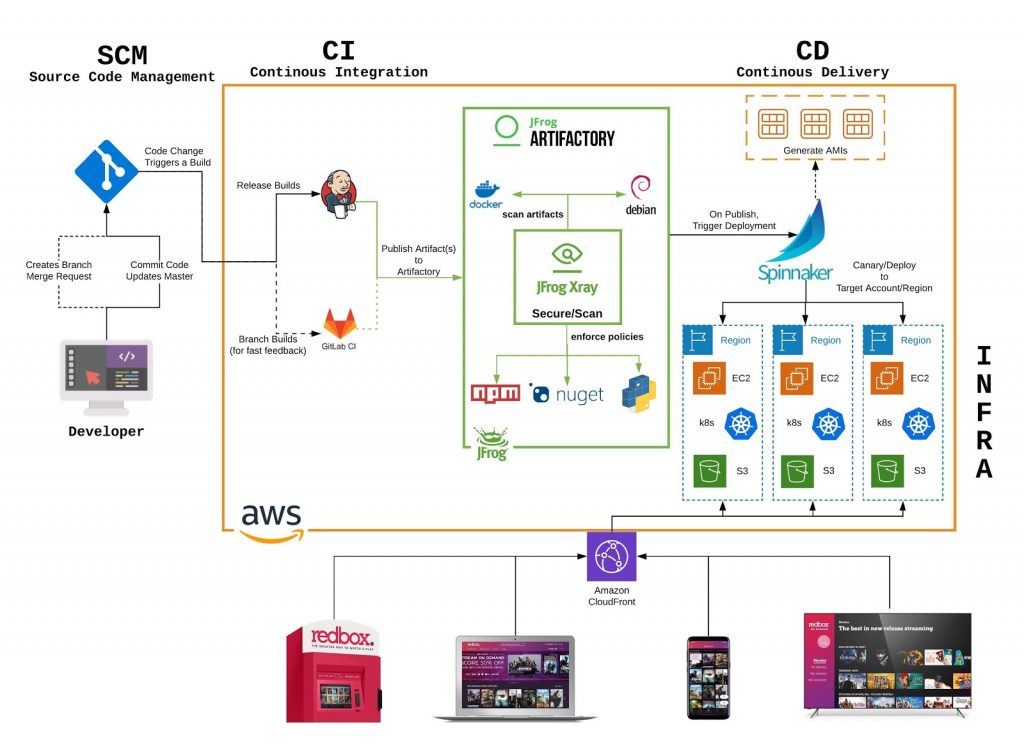 “As a long-time DevOps engineer, I know how difficult it can be to keep track of the myriad of package types – legacy and new – that corporations have in their inventory. JFrog has always done a phenomenal job at keeping our team supported, efficient and operational – because if JFrog goes out, we might as well go home. Thankfully, with AWS infrastructure at our backs as well, we know we can develop and deliver with confidence anywhere our business demands today, and in the future.” 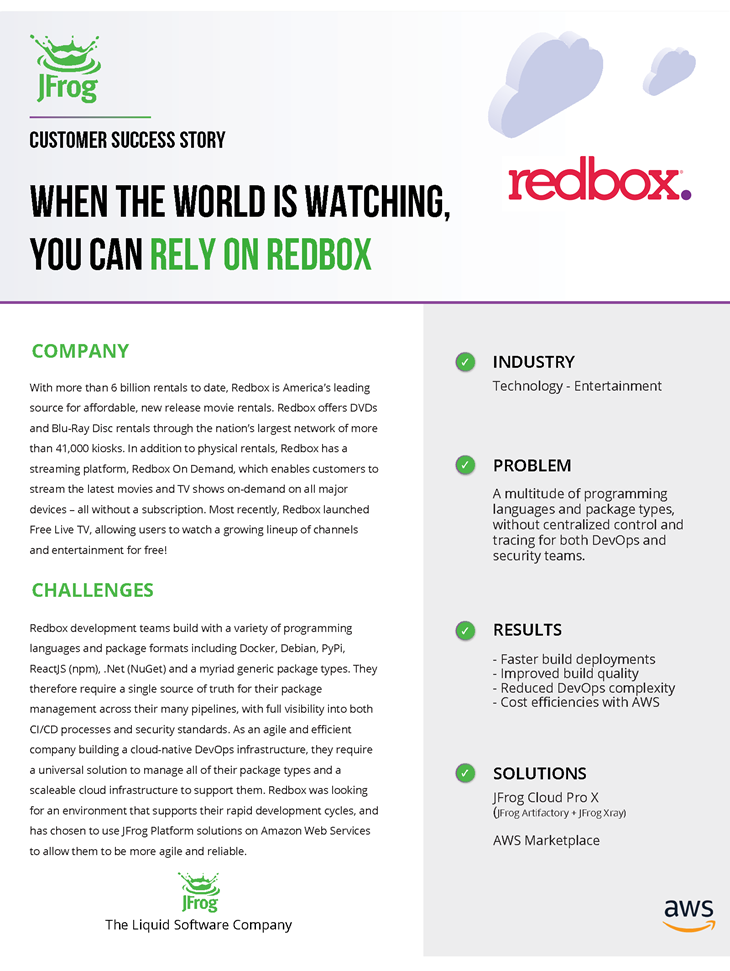