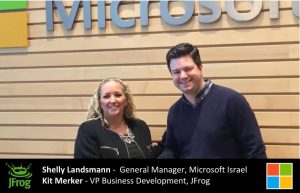 Moreover, Artifactory SaaS provides powerful REST APIs for release automation & deployment, LDAP authentication support, role based authorization, and the ability for developers to understand everything they need to know about their binaries associated with their builds through the use of Artifactory Query Language (AQL).  Artifactory SaaS makes it easy for DevOps teams to have full transparency and control of the entire build and release process, all with the power of cloud-based development (immediate scalability with flexibility, up-to-date versions of Artifactory, automated backups, SLA-based support, among others).

“Together with JFrog, we want to help companies develop software as fast as possible,” said Shelly Landsmann, GM of Microsoft Israel. “We understand the need to quickly develop, test, and deploy software and applications, and with JFrog Artifactory, we are providing global enterprises with a robust cloud computing service.”

“Our customers care about rapid releases and reliable cloud infrastructure and the combination of JFrog Artifactory and Microsoft Azure addresses this exact need” said Kit Merker, JFrog’s Vice President of Business Development. “No one wants just a single package repository; all of our customers expect one DevOps stop that supports their Docker, Debian or Maven packages, with this partnership they can run it on Azure’s powerful infrastructure” Merker also added “We are committed to making DevOps available to everyone, everywhere and our new partnership with Microsoft Azure is a great milestone in this roadmap.”

JFrog is essential to software development organizations, in all industry sectors, who need to release software updates at an ever-increasing pace to stay ahead in highly competitive markets. With release cycles getting shorter and shorter, JFrog’s products empower organizations to adopt DevOps practices, allowing them to securely scale up and automate their binary artifact workflow at all stages of the development cycle, from development through distribution to end users and devices.

Microsoft Azure is a growing collection of integrated cloud services that developers and IT professionals use to build, deploy and manage applications through a global network of data centers. With Azure, developers get the freedom to build and deploy wherever they want, using the tools, applications, and frameworks of their choice, including cutting edge Container Services as a deployment option.

JFrog is the leading Universal Solution for software binaries management and distribution for all DevOps needs. JFrog’s four products JFrog Artifactory, the Universal Artifact Repository, JFrog Bintray, the Universal Distribution Platform, JFrog Mission Control, for Universal Repository Management, and JFrog Xray, Universal Component Analyser, are used around the world and available as open-source, on-premise and SaaS cloud solutions. Customers include some of the world’s top brands, such as Amazon, Google, MasterCard, Netflix, Microsoft, CITI Bank,Cisco, Oracle, Adobe and VMware. The company received $50 Million in funding at the beginning of 2016, and is privately held and operated from California, Israel and France. More information can be found at jfrog.com.