SAN FRANCISCO (September 11, 2019) – JFrog, the award-winning DevOps technology leader known for enabling liquid software via continuous update flows, has been named to the prestigious Forbes 2019 Cloud 100 list for a second consecutive year – the definitive ranking of the top 100 privately-held cloud companies in the world. The Cloud 100 list is published by Forbes in partnership with Bessemer Venture Partners and Salesforce Ventures.

“For four years now, we have ranked the best and brightest emerging companies in the cloud sector,” said Alex Konrad, Forbes editor of The Cloud 100. “With so many businesses growing fast in the cloud, from cybersecurity and marketing to data analytics and storage, it’s harder than ever to make the Cloud 100 list – but with more elite company if you do. Congratulations to each of the 2019 Cloud 100 honorees and the 20 Rising Stars honorees poised to join their ranks!” 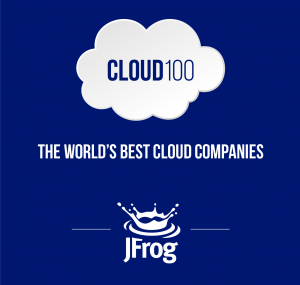 JFrog and the JFrog Platform are a driving force behind DevOps in the cloud, with enterprise-grade solutions integrated across all major cloud automation platforms – Microsoft Azure, Amazon Web Services [AWS] and Google Cloud Platform [GCP] – affording developers the flexibility and choice to meet their unique delivery requirements.

“We are honored and humbled to be recognized again as one of the top 100 privately-held cloud companies in the world,” said Shlomi Ben Haim, JFrog CEO and Co-Founder. “We’re driven by a single vision: to enable ‘Liquid Software,’ which delivers fast, automated and secure updates that flow continuously with no downtime. We imagine a world without software versions, and awards such as this provide validation of that vision.”

“We’re committed to investing in companies that are developing ground-breaking products, including those that leverage the power of the cloud,” said Jai Das, President and Managing Director at Sapphire Ventures. “The JFrog platform enables continuous software updates for companies all around the world via cloud, revolutionizing the speed at which software is updated. We’re excited to partner with the JFrog team to continue driving cloud growth and momentum in the DevOps and DevSecOps industries.”

JFrog is a fully hybrid, multi-cloud and universal DevOps and DevSecOps solution that powers software packages from code repository to deployment. With more than 500% sales growth in the past 3 years, over 5,500 customers, including more than 70% of the Fortune 500, now trust JFrog with their hybrid DevOps pipelines. A listing on the Forbes Cloud 100 is strong validation of JFrog’s continued focus on delivering cloud-first DevOps innovation.

As part of the rigorous selection process for the Forbes 2019 Cloud 100, Bessemer Venture Partners received submissions from hundreds of cloud startups. The Cloud 100 Judging Panel, made up of public cloud company CEOs, reviewed the data to select, score, and rank the top 100 private cloud companies from all over the world. The evaluation process involved ranking companies across four factors: market leadership (35%), estimated valuation (30%), operating metrics (20%), and people & culture (15%).

“There has been tremendous growth in the cloud market in recent years, as more and more companies are adopting cloud technologies to enable their digital transformation and change how they do business. The opportunity is massive in the cloud sector, which is evident in both the public and private sectors. There are now more than 15 public SaaS companies valued at over $10B whereas even 5 years ago there were only 2,” said Matt Garratt, Managing Partner, Salesforce Ventures. “The growth we are seeing is not limited to the Bay Area and San Francisco, as we are seeing more $1B+ cloud companies spring up throughout the U.S. and globally. Salesforce Ventures is excited to be partnering with Bessemer Venture Partners and Forbes for the fourth year in a row to recognize the next generation companies who will land on the Cloud 100 list—those who are not just predicting what’s coming but working to create the future.”

The Forbes 2019 Cloud 100 and 20 Rising Stars lists are published online at www.forbes.com/cloud100 and will appear in the September 2019 issue of Forbes magazine.

About JFrog – the Liquid Software Company

JFrog is on a mission to enable continuous updates through liquid software, empowering developers to code high-quality applications that securely flow to end-users with zero downtime. JFrog is the creator of Artifactory, the heart of the end-to-end Universal DevOps platform for automating, managing, securing, distributing, and monitoring all types of technologies. JFrog products are available as open-source, on-premise, and on the cloud on AWS, Microsoft Azure, and Google Cloud. As the leading universal, highly available enterprise DevOps Solution, the JFrog platform empowers customers with trusted and expedited software releases from code-to-production. Trusted by more than 5,500 customers, the world’s top brands, such as Amazon, Facebook, Google, Netflix, Uber, VMware, and Spotify depend on JFrog to manage their binaries for their mission-critical applications. JFrog is privately held with offices across North America, Europe, and Asia. Learn more at jfrog.com.