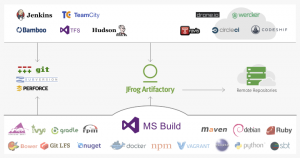 Artifactory brings Continuous Integration to MSBuild, TFS and Visual Studio through the MSBuild Artifactory Plugin. Using this plugin,  MSBuild can be configured to resolve dependencies and deploy build artifacts through Artifactory.

But there is another big advantage of Artifactory’s integration with MSBuild.

Artifactory generates exhaustive build information and uploads it to a local repository together with the build. This includes specific artifact versions, dependencies, system properties, environment variables, user information, timestamps and more. With this information, it is easy to faithfully reproduce a build at any time. Moreover, with built-in “Diff” tools you can compare builds and therefore know exactly what changes were introduced from one version to another. These capabilities can be invaluable when trying to track down bugs that were reported in specific versions released.