Napa, California – May 25, 2017 – JFrog, the DevOps enabler and creator of solutions for managing binaries, announces that the Dimon team experts in CI/CD and Bot Automation will be joining JFrog. This follows JFrog’s acquisition of Conan.io, the providers of the C++ package manager late last year, and is another step forward in JFrog’s strategy to expand its platform of tools for the management and distribution of binaries, moving DevOps closer to its vision for Liquid Software. 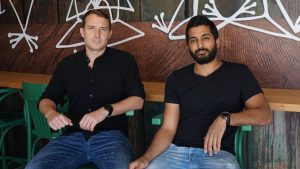 “Continuous Integration and automation are necessary parts of any software delivery organization that wants to reduce release cycles and deliver software updates faster,” said JFrog CEO, Shlomi Ben Haim. “From the first meeting with Dimon’s team, it felt natural to collaborate. Their deep knowledge and experience with DevOps and software automation is a great addition to our team, and we are extremely excited to have them at the Swamp.”

Eran Bernstein, Dimon CEO and co-founder said, ”Our vision is for CI systems to test, deploy, and update production systems automatically, and this is perfectly aligned with JFrog’s vision for liquid software.  Our expertise in developing open APIs that can interface with any CI system fits JFrog’s universal approach and can accelerate the path that JFrog is taking towards continuous update.”

This announcement follows others that JFrog made today at its annual user conference, swampUP, taking place for the third consecutive year in Napa, CA.

With more than 3,500 customers and over 2 billion downloads per month on its binary hub, JFrog is the leading universal solution for the management and distribution of software binaries. JFrog’s four products, JFrog Artifactory, the Universal Artifact Repository; JFrog Bintray, the Universal Distribution Platform; JFrog Mission Control, for Universal DevOps flow Management; and JFrog Xray, Universal Component Analyzer, are used by DevOps engineers worldwide and are available as open-source, on-premise and SaaS cloud solutions. Customers include some of the world’s top brands, such as Amazon, Google, Uber, Netflix, EMC, Cisco, Oracle, Adobe and VMware. The company is privately held and operated from California, France, and Israel. More information can be found at jfrog.com.

Using today’s tools and methods, it’s practically infeasible (in terms of time to market and resources) to truly validate a bot’s behavior before going live. The number of variations in a conversation and ways users can interact with the bot is enormous. Dimon is the first company to build a solution that helps minimize the top risks involving a misbehaving bot.

Dimon provides a set of tools based on CI systems to test, deploy and update production bots. Dimon’s partners and customers are bot ecosystem leaders including enterprises and bot driven startups. Dimon founders are Eran Bernstein and Noam Shemesh, who are located in Tel Aviv, Israel.