Yalla! DevOps was back again this year with an exciting lineup of content ranging from DevOps, DevSecOps, professional development and more. Local speakers from the DevOps community and industry leaders from around the world took the stage making it one of the best DevOps community events this year.

Keep reading for a recap of Yalla! DevOps 2022.

Opening the event was Shlomi Ben Haim, JFrog CEO & Co-Founder, providing significant DevOps industry insights, including how DevOps has matured and is mission critical. Our customers are saying: “If DevOps is down, our business is down.” As well as additional DevOps market trends, such as how infrastructure is viewed today as a strategic long-term decision, developers want fast end-to-end solutions, and how DevOps is continuing to evolve and adopt additional domains such as security and IoT.

DevOps is part of the journey and your growth plan.
Build it, secure it, deploy it.

Shlomi continued to show the transition of industry trends, including how developer skills are expected to cover the full software supply chain journey. From development, security and all the way to deployment. As well as the rising trend of new tools now available to enable software developers to secure the organization, and the next stage in the DevOps journey which is deployment on the edge.

Best practices from the DevOps community

This was a special opportunity with the community to unveil the new JFrog Innovation Program. An initiative focused on early-stage startups that is designed to offer mentoring, design partnerships, and funds for emerging technology.

Alongside the insightful talks and impressive exhibition hall, this year Yalla DevOps offered attendees the opportunity to provide their thoughts and DevOps expertise with live in-person interviews. 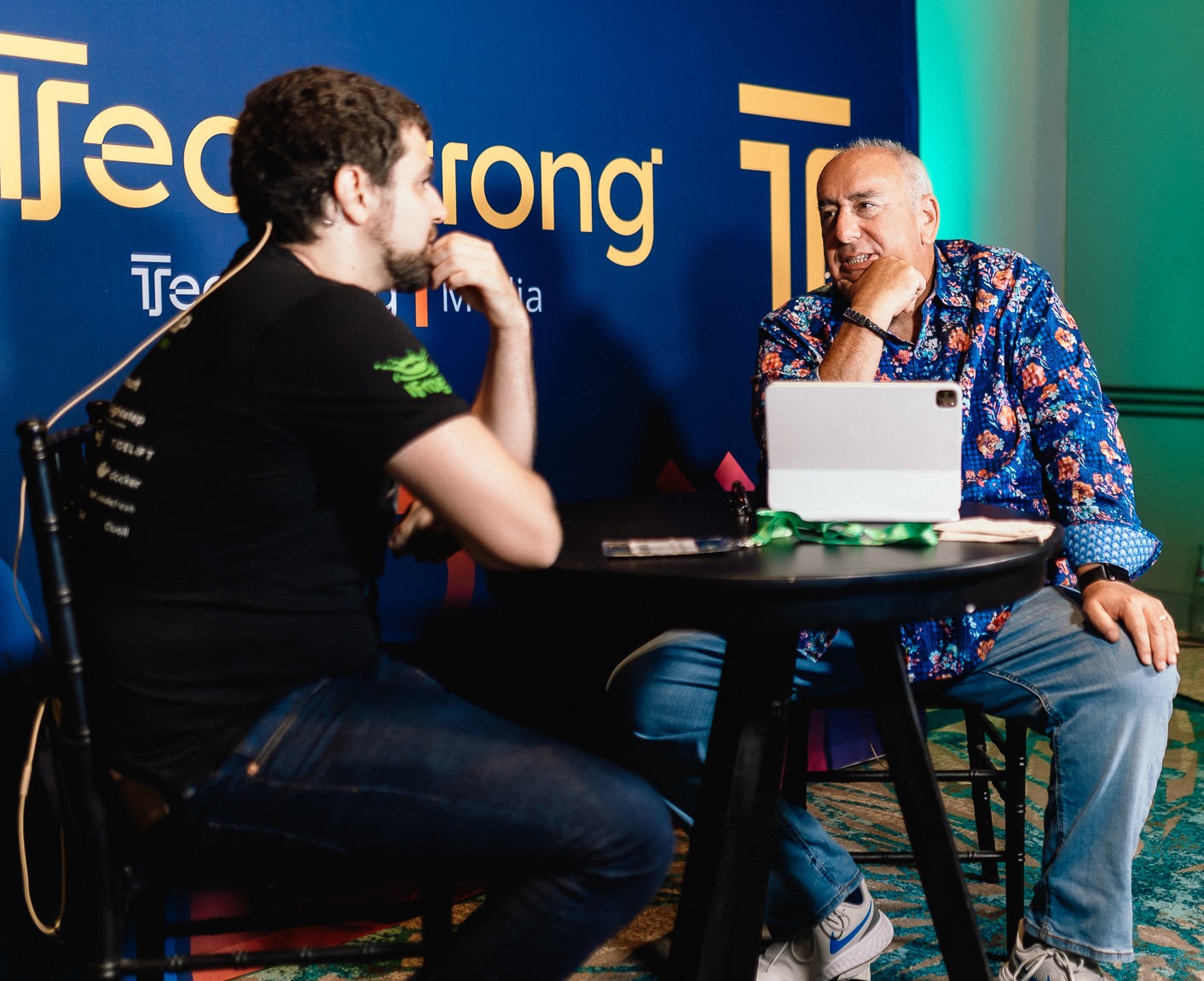 Welcoming back Alan Shimel, CEO of Techstrong, who interviewed DevOps professionals attending the conference throughout the day.Watch on DevOps.com > 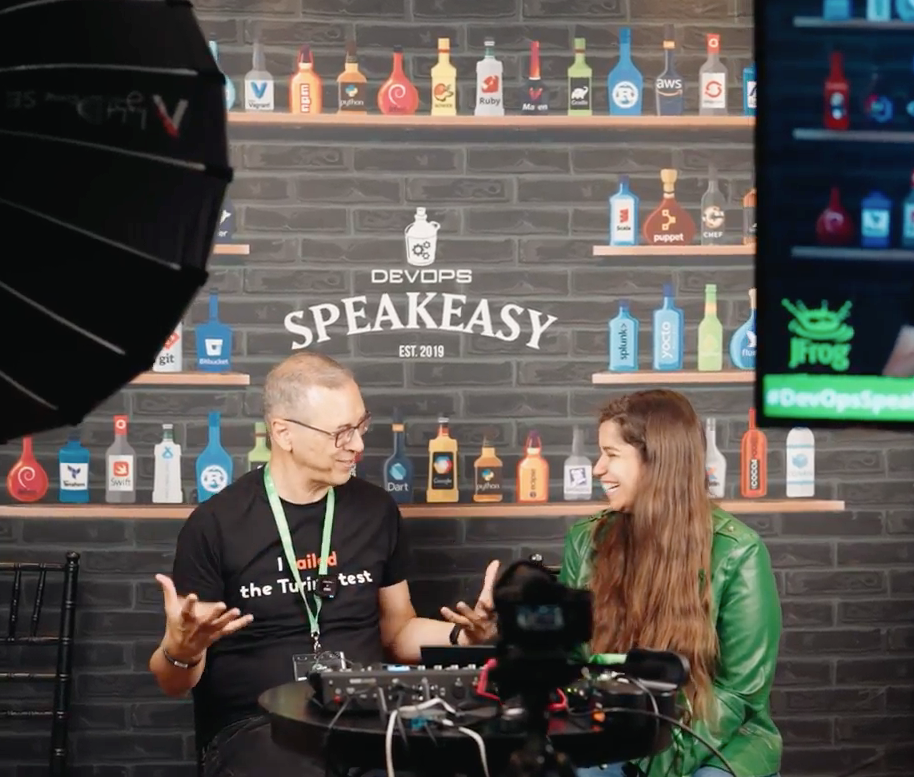 Here are just a few of the amazing talks we had at Yalla! DevOps!

The Battle of Policies: OPA’s Rego vs. JSON Schema 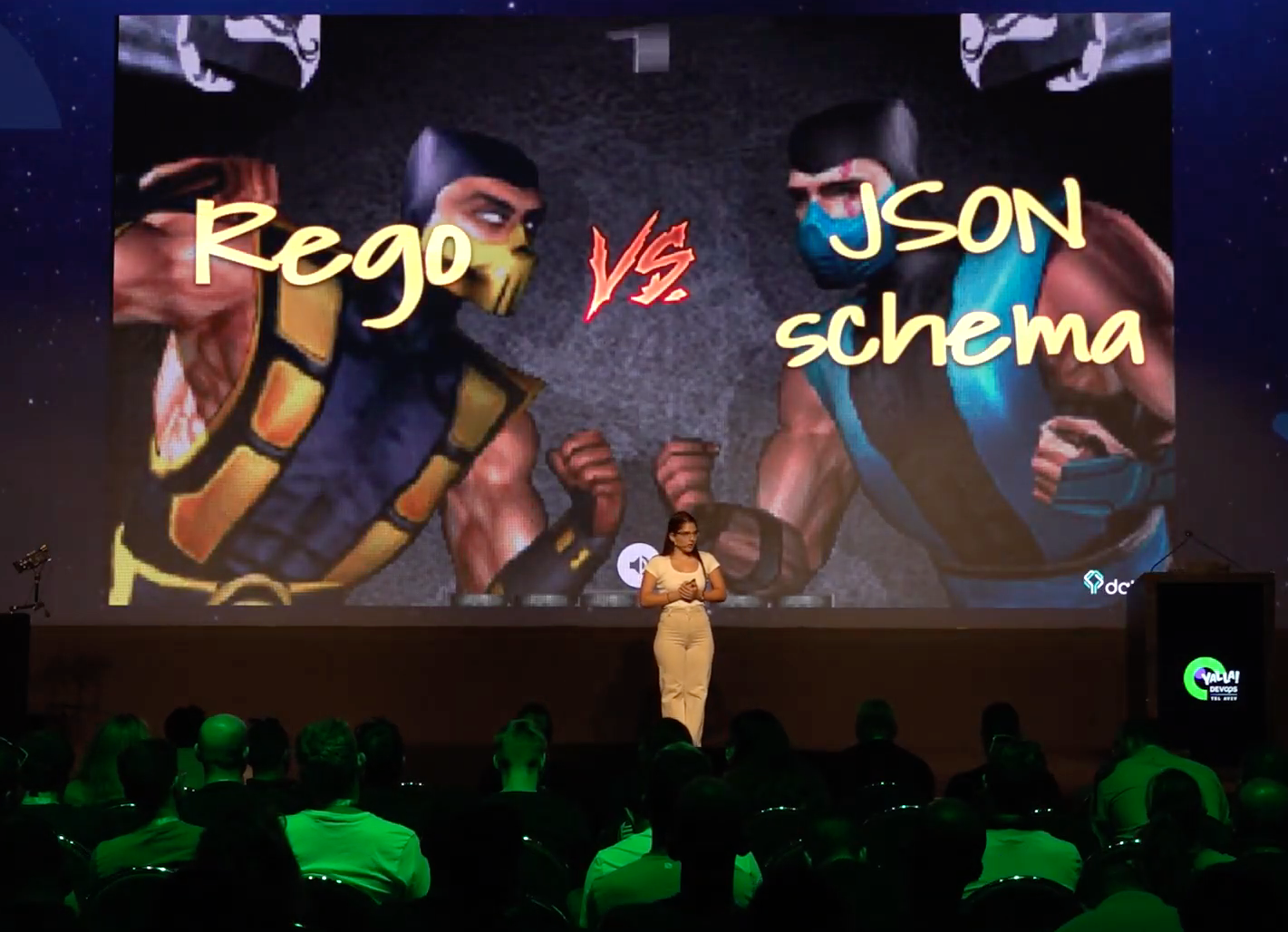 Noaa Barki, Developer Advocate at Datree, takes us through her research journey of comparing OPA’s Rego and JSON Schema. As she and her team made the choice of which one to use for their project. Including the differences, benefits, usage with Kubernetes, integration into CI/CD pipelines and more. Her research summary outlines: 1. The learning curve; 2. Syntax; 3. Collaboration; 4. Maintenance & Debugging; 5. CI/CD Integration; and 6. Maturity. 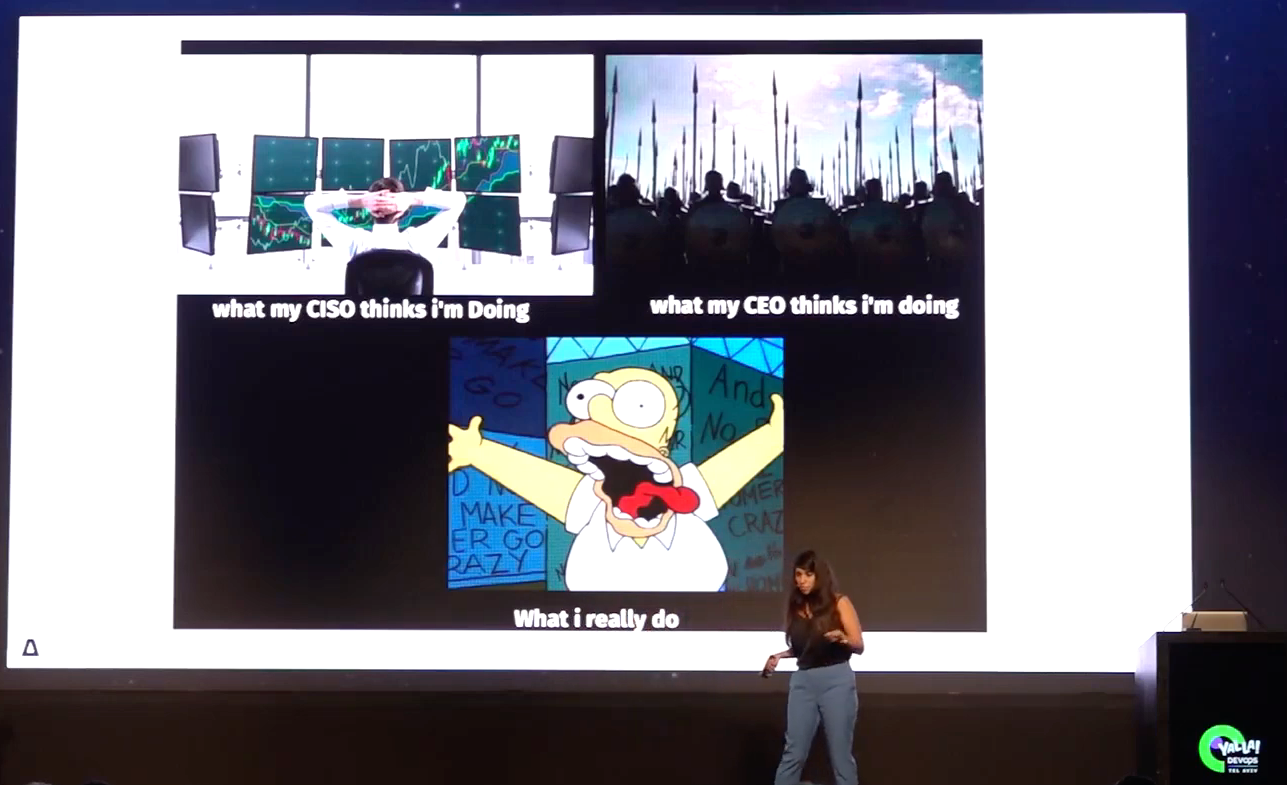 What Product Security Really Means – From Theory to Practice 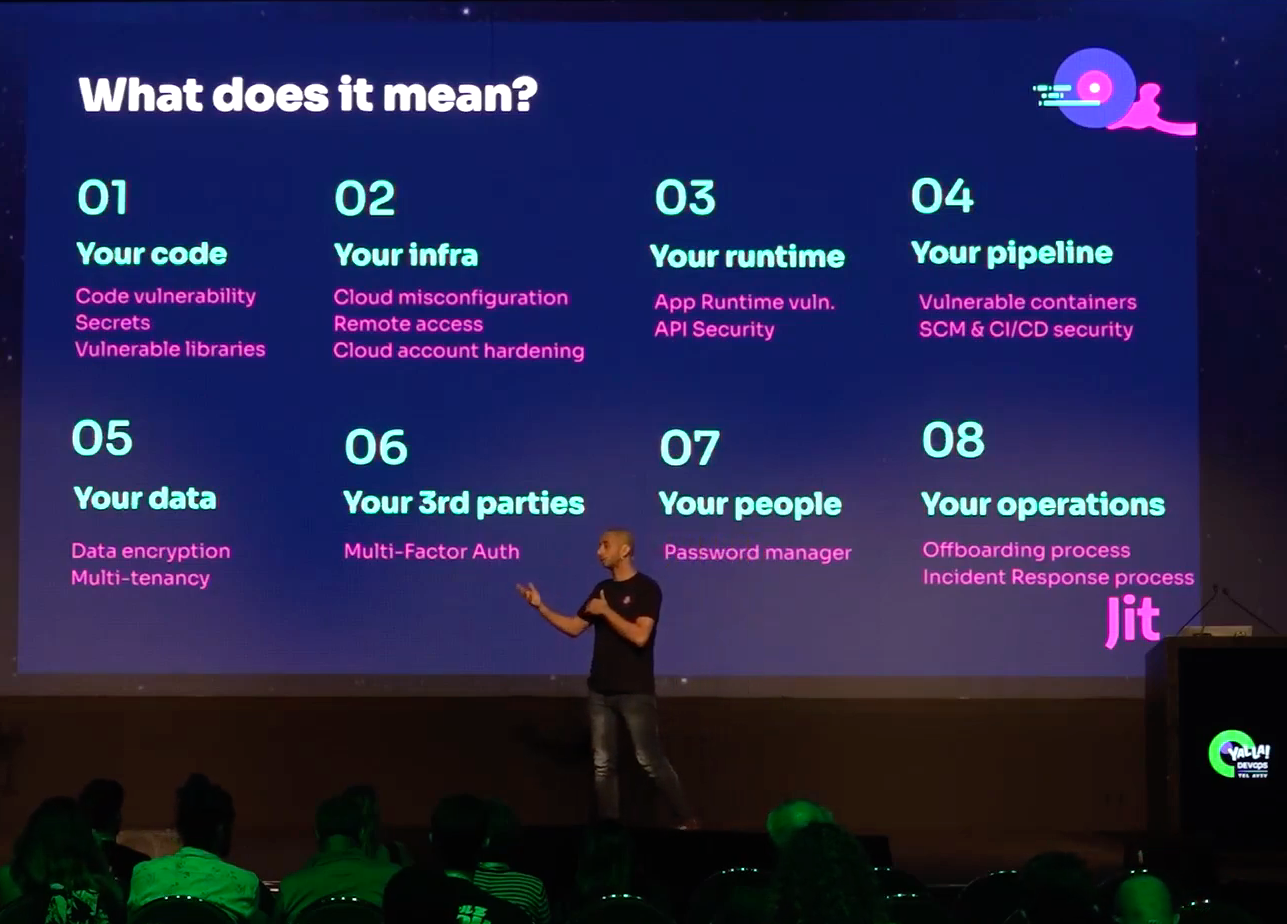 Aviram Shmueli, CPO & Co-Founder at Jit, gave an overview of the Minimal Viable Security (MVS) mindset that should be part of all products. He focused his talk on how to implement a subset of the MVS, including: dependency check, secret detection, container scanning, app runtime scanning, infra-as-code scanning, and cloud runtime scanning. Walking through which tools are right for which job, and good ways to automate security from your very first line of code.

Living on the Edge: The Future of IoT Computing is Here

The number of devices in the world is rapidly growing and computing is moving to the edge. This panel of experts, led by Alan Shimel, discussed the significance of bringing DevOps practices into the world of IoT and edge devices, as new standards. Including the different challenges of securing the software on edge devices, and getting inspired from advanced techniques such as preventing zero-day vulnerabilities.

As a senior security researcher, Or Sahar at F5, offered her advice to all future developers that “we need to teach them security awareness from the first line of their code. It’s extremely important to help developers think about security…to think like a hacker.”

Natali Tshuva, Sternum CEO and Co-Founder, continued to highlight that “when you talk about on-device security, you actually talk about developer security, because CISO’s don’t have access, you have access.” “The key is developers, because as you build your software, this is where you can deploy solutions that protect your software in real-time — and go through scanning, to prevention, to remediation, to real-time analytics, and the time to embed these kinds of things is while you develop and update your devices.”

Fred Simon, JFrog Chief Data Scientist and Co-Founder, stressed the importance of being able to update devices and the potential dangers of not having this ability. This is one of the main barriers that we are facing in IoT security. Bringing the change to the IoT world, “the only way to get value from our device, to secure our device, and to really change and bring so many billion devices is to continuously update them, and not be afraid of updating them. It needs to be part of how we think and what we do.”

The Continuous Software Supply Chain: From Dev to Device

Yalla! DevOps brought together our leading experts that demonstrated the IoT vision becoming a reality. 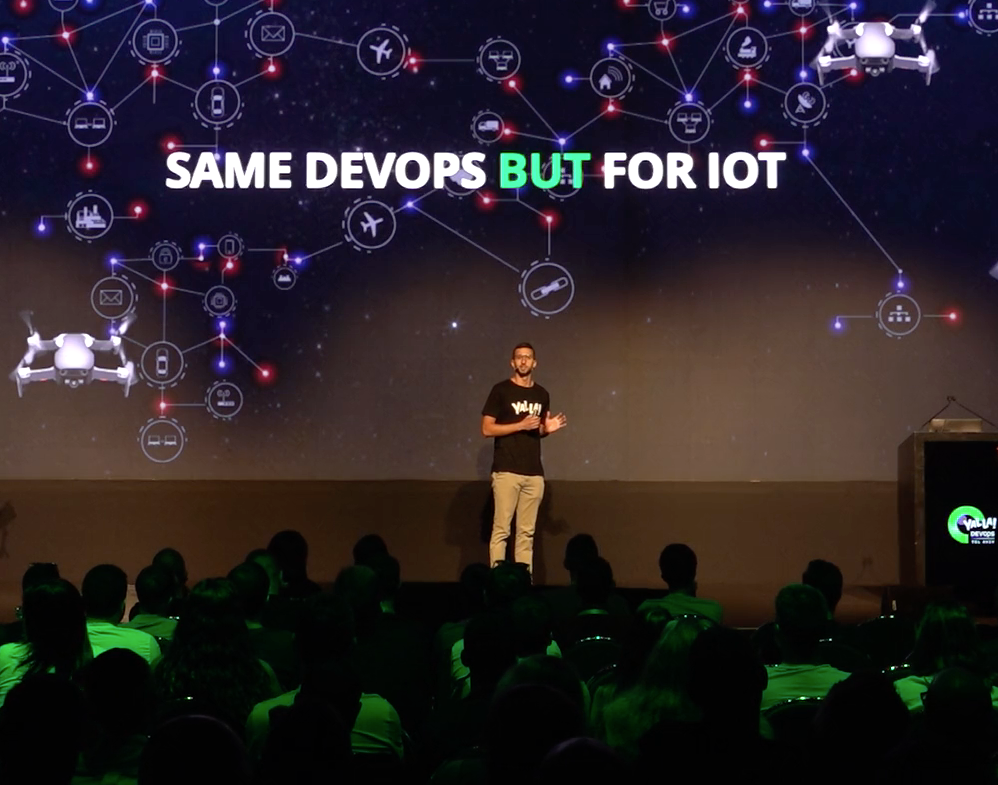 He continued with a demo showing how to solve these challenges using DevOps tools for IoT. Learn more about JFrog Connect, the first end-to-end platform for connected devices. 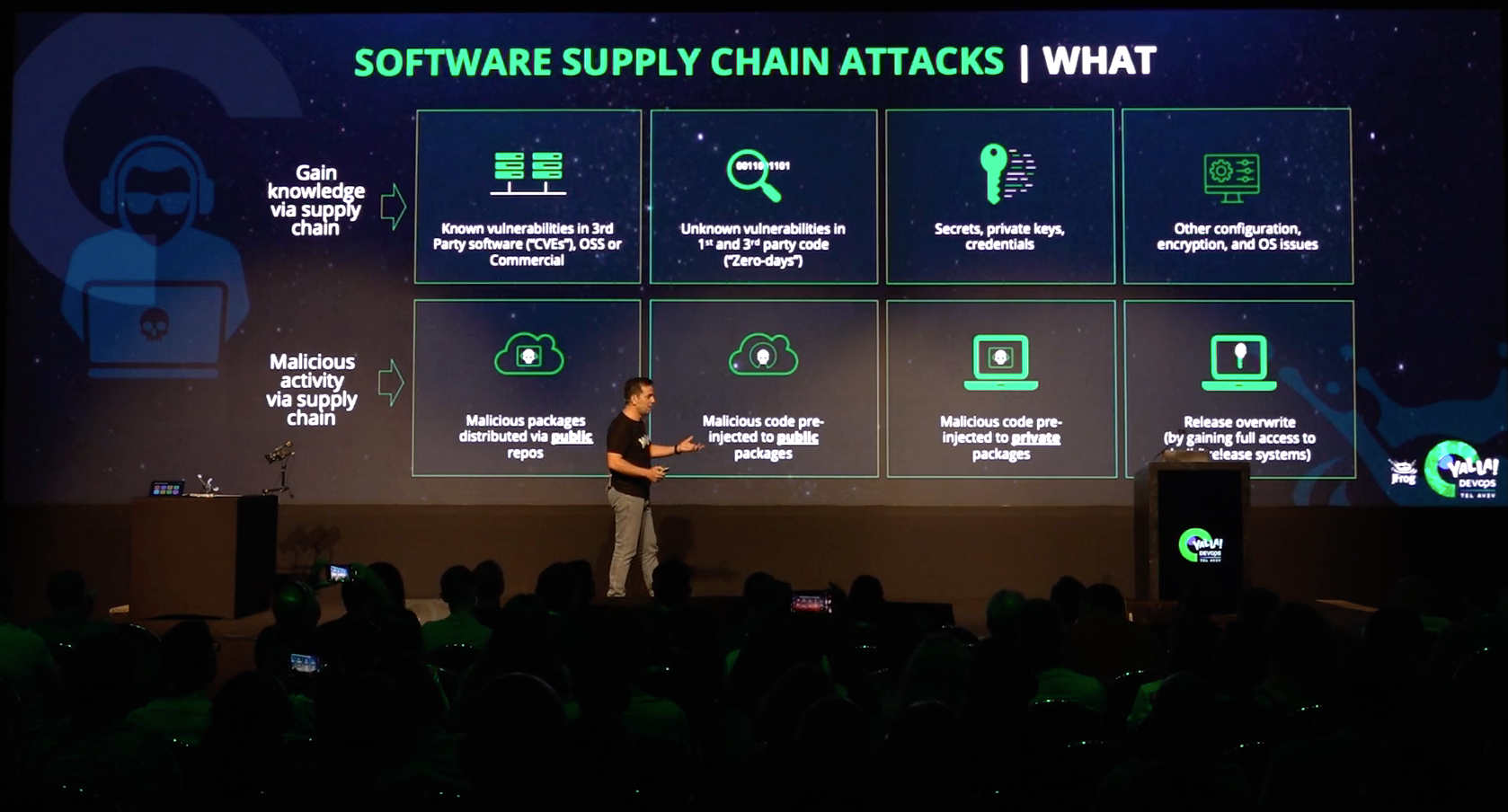 What are software supply chain attacks

Closing this keynote with an amazing community initiative were Baruch Sadogursky, JFrog Principle Developer Advocate and Fred Simon, JFrog Chief Data Scientist and Co-Founder. Bringing the community together to build trust in open source software dependencies. Pyrsia is a decentralized package network, which is reliable, secure and always open. It creates a full network for all developers and organizations participating in this OSS community.

Joining Baruch and Fred was Justin Cormack, Docker CTO, who talked about the importance of Pyrsia being part of the community, solving software supply chain security challenges. “It’s really brought the community together to work together on solving new problems.”

These are just a few of the amazing sessions that took place. Check out all the sessions and lighting talks available now on-demand. Thanks to everyone who made Yalla! DevOps a success.

See you next year!