When you publish software for distribution on Bintray, you generally want to give it as wide a reach as possible and expose it to as many potential users as you can. But there are also cases in which you have to restrict access to certain countries. For example, government security or export regulations may forbid you from doing business with certain countries, or your own company may even restrict your particular organization to distributing your software in your own local region of the world. This is where Bintray’s Geo Restriction feature saves the day.

Bintray’s Geo Restriction feature works by letting you define a whitelist or a blacklist per repository. If you create a whitelist, only users from countries entered in the list will be able to download software from the repository. A black list works the opposite way; users from countries in the list are forbidden from downloading software. Bintray determines where a download request is coming from by passing the request IP to a GeoIP provider who determines the country from which the request originated. Then, if a Geo Restriction is applied to the target repository, Bintray will make sure the request can be honored according to the whitelist or blacklist defined. For download requests from countries restricted from accessing a repository, Bintray will respond with an error.

Geo Restriction is available for repositories in an Enterprise account. Gold account users can also see how this feature works, but are limited to one country in the list.

You can define a whitelist or blacklist by selecting the Geo Restriction tab in the Edit Repository page for each of your repositories. Note that you can only edit the repository if you own it, or if it’s owned by an organization of which you are a member and have the required authorization to do so. 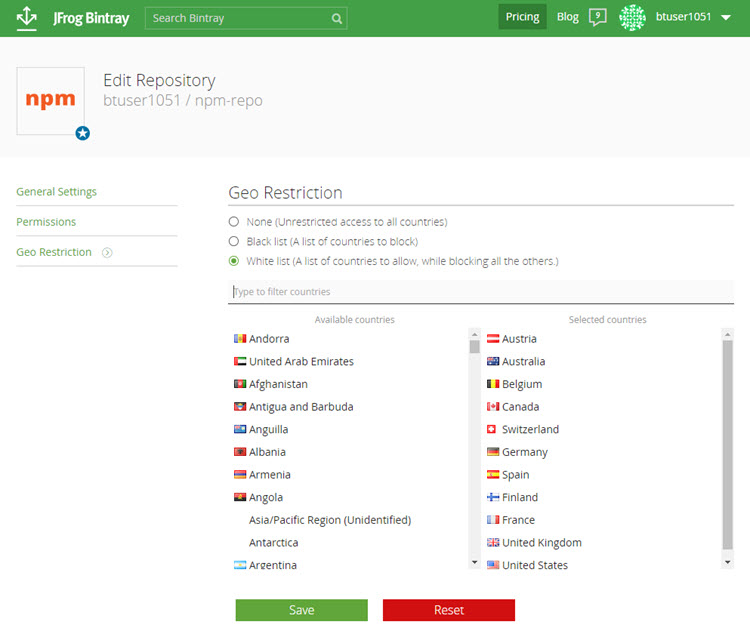