The complexity of the modern software development process and its reliance on large community-maintained codebases introduces a risk for developers to inadvertently include malicious code into the project. The implications can be severe: in many cases, it can mean a complete takeover of the developed program or device by an attacker.

Attackers attempt to generate this scenario in several ways, among them trying to introduce malicious or vulnerable code into open-source projects and using Typosquatting – adding malicious code into software repositories such as PyPI and npm under names which could be included in a project by mistake (such as misspelled names of legitimate software packages).

In this blog post, we present our own additional research done on top of a novel detection by Sonatype, where a few PyPI packages were detected as malicious packages, packing a crypto-miner payload that mines Ethereum or Ubiq for the attacker.

The flow of the attack

The typosquatting attack flow of the malicious published packages can be summarized in the following way:

Or, in diagram form –

A brief overview of Typosquatting

Typosquatting is the practice of obtaining (or “squatting”) a popular name with a slight typographical error. For example – buying the domain name “gogle.com” (instead of the legitimate “google.com”) hoping that users will occasionally make typing errors and reach the illegitimate domain. This can then further be used for Phishing and code injection attacks. The practice applies to many different resources, such as web pages, software package names, and even executable names. In this case, the typosquatting attack was performed on PyPI, while ensnaring any developer that misspelled the “matplotlib” package name when using pip install.

The Python payload – Naïve Typosquatting vs. a trojan package

In the case of this attack, the Python payload was extremely short and simple –

Since this is the entire Python payload, it is elementary to detect using automated methods since a “download and execute” command (especially while using the shell via subprocess) is highly malicious.

Some of the previous supply chain attacks were much more subtle and introduced a “trojan library” – meaning a library that was actually of some use, but had a small piece of hidden malware code inside it. For example, in a previous attack, a malicious npm package provided colorful logging features for the console, along with a hidden credential stealer.

matplatlib-plus – a slight variation on the above

The matplatlib-plus payload is slightly different than maratlib, which was researched in Sonatype’s article. From a high-level perspective, it operates similarly – namely downloading the T-Rex crypto miner from its GitHub repository and running it, but there are a couple of differences:

Additionally, the obfuscation technique used here is a bit more sophisticated, and all arithmetic operations are replaced with lambdas: 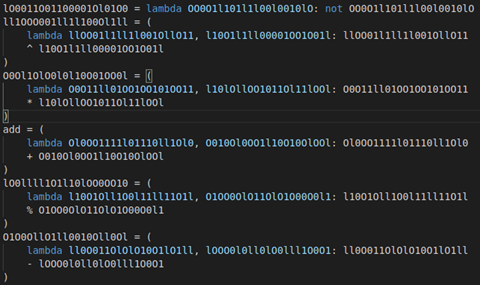 The code also periodically connects to one of these popular URLs, probably to check for network connectivity: 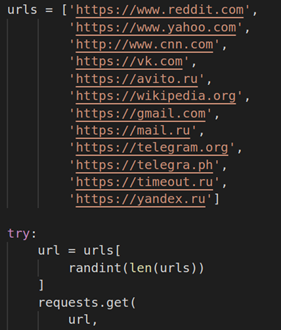 As shown before, the Python payload will download and execute a dropper script.

The dropper is specifically a shell script named aza.sh or aza2.sh, which is extremely naive and raises suspicions even on a cursory first glance:

As we can see, the dropper just downloads and executes a crypto miner, in this case PhoenixMiner, and sends the results to a hardcoded Kryptex wallet.

No obfuscation efforts were made here, and this shell script is also something that can be easily detected, if only due to the use of a well-known crypto miner tool.

The attackers used obfuscation to protect the malicious logic from manual analysis and automated static analyzers.

In the original article, the obfuscation was “skipped” by finding an older version of the malicious “maratlib” package, but as we will show here – dealing with the obfuscation of the newer versions (for example, maratlib 1.0) is pretty straightforward as well.

The code may appear highly obfuscated at first – the first 400 lines of code are gibberish, including base64 strings and arithmetic operations – 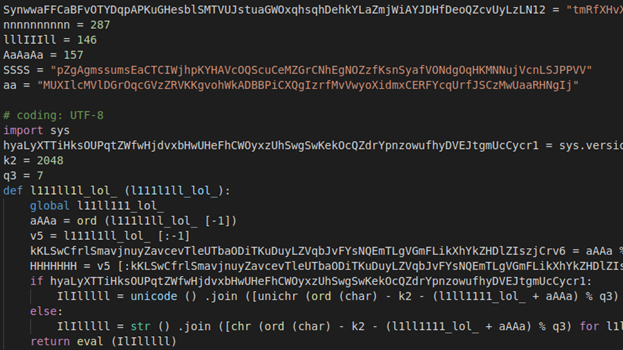 But more careful analysis shows that most of the variables and operations are “garbage code” aimed to mislead manual investigation and not actually used in the malware’s logic. The rest of the code is a lot clearer, but still challenging to read:

As we can see from the figure above, the attackers based the obfuscation mainly on string encryption. The function l1ll1ll11_lol_ takes an encrypted string as the parameter and returns the original one.

The obfuscation can be easily reversed by printing out the output of the function in the interpreter. This can be done, for example, by grepping for all invocations of the obfuscator function and wrapping them with print(…) and then re-running inside a safe environment (ex. virtual machine):

After automating this task through a suitable script, we will get the actual malicious code, which in this case downloads and executes a shell script seo.sh:

In our case, the JFrog security research team (formerly Vdoo) detected these packages as potentially malicious due to the obfuscation that was used. Specifically, we can see that eval-based obfuscation was used in maratlib and maratlib1:

using eval in Python scripts (especially ones that are published through PyPI) is something that immediately raises suspicion since:

Coupled with the suitable filters to avoid false positives, the usage of eval is a powerful indicator of malicious activity.

Some of the properties that facilitate this kind of attack (from the attacker’s perspective) can be actually leveraged against the attacker. The targeted package necessarily needs to be highly visible: to be located in a widely used repository and be sufficiently widespread. The selected misspelled name should be close enough to the name of the targeted package, which is easy to quantify using well-known metrics (Levenshtein or edit distance). Thus, even from very shallow metadata (package names and usage statistics), one can easily find candidates for Typosquatting by selecting packages that have a short edit distance from another popular package. Using this as a first-order filter, one can then study the source code of the suspicious packages (either manually or automatically) and look for other indicators of malicious behavior, such as network interfaces, use of cryptographic API, or any of the malicious indicators that were previously mentioned.

Developers can take matters into their own hands to avoid these sort of attacks:

To prevent Dependency Confusion – Manage the way that repositories are queried and artifacts are pulled when resolving dependencies in the build process, for example by setting up exclusion rules to prevent searches for internal private artifacts in remote repositories, or defining the order in which varied repositories are searched in order to resolve a dependency. More information is available in our recent blog post.

Some of the package managers maintainers decided to take a more active approach to hinder these attacks, for example, on PyPI, other than deleting malicious packages, there are several users that deliberately reserve “Typosquatting-prone” names, so that they cannot be maliciously used (for example the user htdge has done this for a few packages).

The npm maintainers take an active role themselves and have reserved thousands of packages under the description “Security holding package”.