The JFrog Security research team constantly monitors open-source projects to find new vulnerabilities or malicious packages and share them with the wider community to help improve their overall security posture. As part of this effort, the team recently discovered seven new security vulnerabilities in ClickHouse, a widely used open-source Database Management System (DBMS) dedicated to online analytical processing (OLAP). ClickHouse was developed by Yandex for the Yandex.Metrica, a web analytics tool often used to get visual reports and video recordings of user actions, as well as track traffic sources to help evaluate the effectiveness of online and offline advertising. The JFrog Security team responsibly disclosed these vulnerabilities and worked with ClickHouse’s maintainers on verifying the fixes.

Following are the seven vulnerabilities the JFrog Security team discovered:

The ClickHouse server allows a user to compress its queries. A user can pass a compressed query by supplying the decompress=1 URL query string parameter to its web interface, like so:

Where serverIP is the IP address of the ClickHouse server that has a user “guest1” with password “1234” set up. This user can also be configured with a “readonly” policy.

The query’s content (query.bin) should be in the following format:

The client supplies the entire struct to the server and thus controls all of its contents.

The compressed data is consumed by constructing a CompressedReadBuffer instance with the struct as its input.

CompressedReadBuffer’s code calls readCompressedData which reads the struct and extracts its length values, calculates the CityHash128 over the struct contents (excluding the hash field), and verifies it against the struct’s hash field. It then resizes (basically realloc()’s) the initially allocated memory buffer used to hold the decompressed data. Then, through ICompressionCodec::decompress, the selected codec’s doDecompressData is called.

In CVE-2021-42387, CVE-2021-43304, CVE-2021-42388 and CVE-2021-43305 the LZ4 codec calls LZ4::decompress(source, dest, source_size, dest_size, ..) with the ‘compressed_data’ as source, its length as source_size, the resized memory buffer as dest, and the struct’s ‘decompressed_size’ value as dest_size. LZ4::decompress eventually calls LZ4::decompressImpl(source, dest, dest_size) that does the actual LZ4 decompression in a loop –copying different parts of the compressed input in user-controlled lengths and offsets (supplied as part of the compressed_data bytes) to the decompressed output memory buffer. It defines pointer variables for tracking the current location in the source (ip) and the dest (op).

copy_amount is the parameter of the template, which can be 8, 16 or 32. The copy area is being copied in chunks that each one of them is in size of copy_amount. For example, this is the implementation of wildCopy16:

Since the user controls decompressed_size and the compressed buffer, an attacker can take advantage of this situation by preparing compressed data with a header that contains a decompressed_size which is smaller than the actual size of the compressed data. Note that the lengths of the overflow, as well as source’s allocation size and the overflowing byte contents are fully controlled by the user, which greatly facilitates exploitation.

Also note that the existing size check of “if (copy_end >= output_end)” does not prevent this vulnerability as it appears after the copy operation. CVE-2021-43305 is similar to CVE-2021-43304, but involves a different copy operation (whose source is a controlled offset of the destination buffer).

In order to prove the exploitability of CVE-2021-43304, we created a specially crafted compressed file and sent it as previously explained. The query.bin file is comprised of the following header:

The 200 0xff’s are being used in the loop inside LZ4::decompressImpl():

So although the decompressed size is 1, a much larger size will be copied to the destination.

By sending the query to a vulnerable ClickHouse server, while debugging the server’s process, we managed to periodically get the following crash, proving control of the instruction pointer register, since the code branches to an address taken from the RAX register, which has been overwritten with our “A” values: 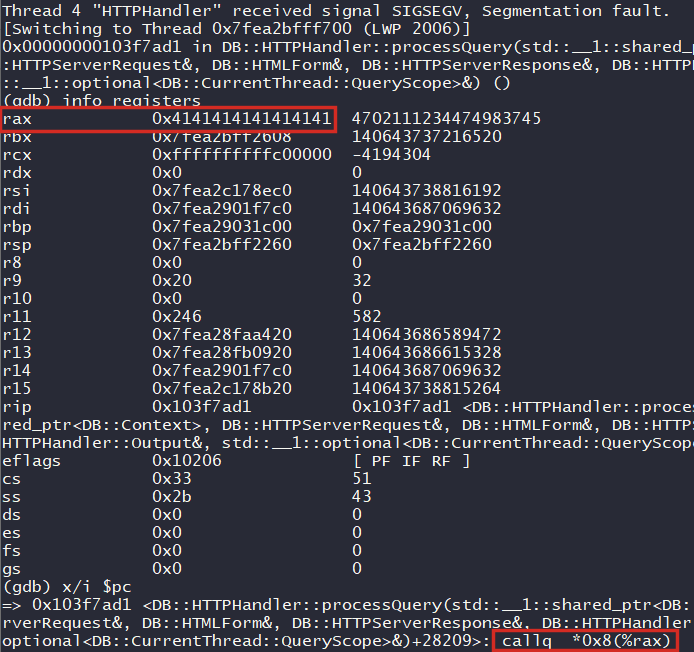 Although this specific crash is statistical, we believe that with proper heap shaping techniques, a stable exploit can be developed.

As part of the LZ4::decompressImpl() loop, a 16-bit unsigned user-supplied value (‘offset’) is read from the compressed_data. it is subtracted from the current op and stored in match pointer (op is a pointer that starts as dest and moves forward). There is no verification that the match pointer is not smaller than dest. Later, there’s a copy operation from match to output pointer – possibly copying out of bounds memory from before the ‘dest’ memory buffer. Accessing memory outside of the buffer’s bounds can expose sensitive information or lead in certain cases to a crash of the application due to segmentation fault.

In most of the cases the modulo operation in Intel x86-64 is performed by a DIV instruction, which, apart from dividing the numbers, also keeps the remainder in a register. So in case bytes_size is 0, it will end up dividing by zero.

These vulnerabilities were found by “smart fuzzing” the decompression mechanism. Smart fuzzing leverages the knowledge of the input format for generating input data which (relatively) adheres to the expected protocol schema, instead of completely random data.

In order to fix the issues, update ClickHouse to the v21.10.2.15-stable version or later.

If upgrading is not possible, add firewall rules in the server that will restrict the access to the web port (8123) and the TCP server’s port (9000) to specific clients only.

JFrog products are not vulnerable to this issue, since they do not use the ClickHouse DBMS

We would like to thank the ClickHouse Inc. team for promptly and professionally handling this issue.

In addition to exposing new security vulnerabilities and threats, JFrog provides developers and security teams easy access to the latest relevant information for their software with automated security scanning. Explore how JFrog Xray can be of help to you.

Questions? Thoughts? Contact us at research@jfrog.com for any inquiries.